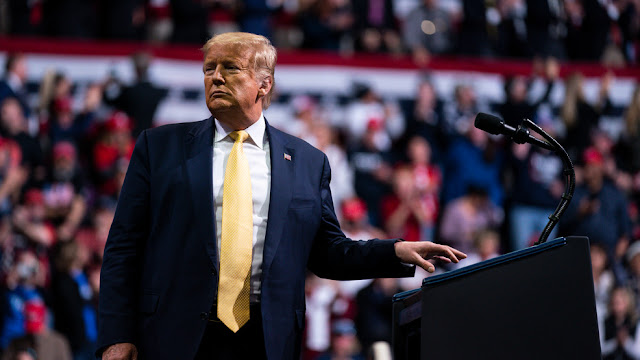 President Trump’s reelection efforts will switch back into action next week for the first time since the coronavirus lockdown ground the campaign to a halt in mid-March.
Trump Victory, the joint venture between the Trump campaign and the Republican National Committee, will resume some campaign activities in states that allow it, a spokeswoman told The Hill.
“Starting next week, Trump Victory field teams will resume in person volunteer activities and campaigning where states allow,” said Mandi Merritt, the national press secretary for the RNC. “Just as Trump Victory was able to transition to virtual campaigning in less than 24 hours, our teams across the country will seamlessly adapt again just as efficiently.”
Trump Victory will transition back to in-person training sessions for campaign volunteers. The committee says it will adhere to local guidelines and safety precautions pertaining to capacity limits and social distancing.
The campaign has not indicated where it plans to restart events but several states run by GOP governors, including Florida, Texas and Georgia, have been more aggressive in reopening their economies.
The reassembling of the in-person campaign comes as polls show Trump falling behind presumptive Democratic nominee Joe Biden in the nearly three months since the country began shutting down from the coronavirus outbreak.
Some national polls show Trump trailing by double digits. A new round of Fox News surveys released Wednesday found Biden leading in Arizona, Ohio and Wisconsin — all states Trump won in 2016. A Quinnipiac University survey found Trump and Biden running neck and neck in Texas.
About 40 million people have filed for unemployment since the coronavirus shutdown.
Polls show voters trust Trump more on the economy, but Biden has a wide lead on who would be better at dealing with the pandemic.
In addition, Biden is viewed as the better candidate on race relations at a time when protests are sweeping the nation in response to the death of George Floyd.
Republicans remain confident that Trump can turn things around in the five months before Election Day.
The president will officially accept the party’s nomination at the GOP convention in July but it remains to be seen where the convention will take place.
Trump says he’s pulling the convention out of Charlotte after feuding with Democratic Gov. Roy Cooper, who has insisted the GOP scale back the convention due to the coronavirus.
National