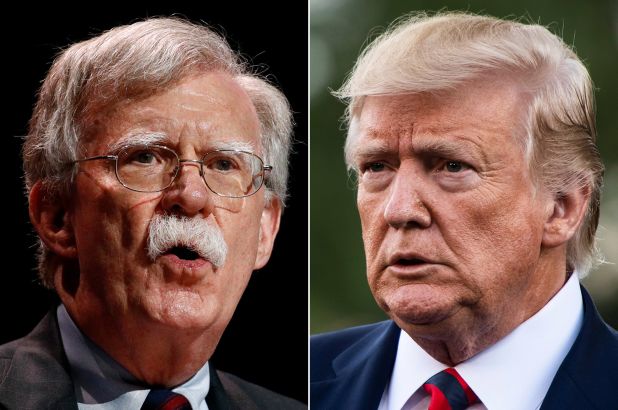 The Trump administration on Tuesday filed a lawsuit seeking to prevent John Bolton from publishing a highly anticipated memoir describing his 17 months serving as President Trump’s national security adviser.
The lawsuit, filed in the U.S. District Court for the District of Columbia, alleges that Bolton’s book, due to be released on June 23, contains classified information that stands to compromise national security if published before a government review is completed.
“[Bolton] regularly came into possession of some of the most sensitive classified information that exists in the U.S. government,” the lawsuit states. “Within two months of his departure from government service, defendant had negotiated a book deal allegedly worth about $2 million and had drafted a 500-plus page manuscript rife with classified information, which he proposed to release to the world.”
The Department of Justice asked the court to declare that Bolton’s account of his time as a top Trump adviser from April 2018 to September 2019 violated his nondisclosure agreement.
The lawsuit also seeks to stop Bolton from disclosing contents from his memoir without U.S. government permission and to order his publisher, Simon & Schuster, to “retrieve and dispose of” any copies of the book held by third parties. Bolton’s attorney has denied that the book contains classified material.
The move had been expected since Monday when reports surfaced that the administration was eyeing a lawsuit to prevent publication of the memoir, titled “The Room Where It Happened,” and comes exactly one week before it is due for public release. The book is said to offer a scathing account of the White House from the former national security adviser’s point of view.
“If he wrote a book, I can’t imagine that he can because that’s highly classified information,” Trump told reporters on Monday when asked about plans to file a lawsuit.
“I will consider every conversation with me as president highly classified. So that would mean if he wrote a book and if the book gets out, he’s broken the law and I would think he would have criminal problems,” Trump added, later claiming he hadn’t viewed the book’s contents.
The memoir’s release has been delayed for months as a result of a prepublication review process spearheaded by the White House National Security Council (NSC) that began when Bolton submitted the book for review in late December.
According to the Justice Department’s complaint, NSC official Ellen Knight had completed her review of Bolton’s book around April 27 “and was of the judgment that the manuscript draft did not contain classified information.” Knight informed Bolton that the process remained ongoing when he asked for an update thereafter, the complaint states.
It says that Michael Ellis, NSC’s senior director for intelligence, subsequently began a review of the manuscript on May 2 and raised concerns it contained classified information. An NSC attorney sent Bolton’s attorney Chuck Cooper a letter on June 8 saying the draft contained classified information and that the manuscript could not be published until the review was completed, after press reports said that Bolton planned to release the book on June 23.
After receiving that letter, Cooper penned an op-ed in The Wall Street Journal accusing the White House of a "transparent attempt to use national security as a pretext to censor Mr. Bolton, in violation of his constitutional right to speak on matters of the utmost public import." Simon & Schuster also said last week that Bolton worked with the NSC to incorporate changes to the book that addressed officials' concerns and that the final product reflects those changes.
Cooper did not immediately return a request for comment on Tuesday evening.
The memoir is expected to contain details about Trump’s interactions with Ukraine related to his impeachment by the House of Representatives last December. Bolton has been an extremely controversial figure as a result of his refusal to testify before the chamber.
The former national security adviser later said he would testify before the GOP-controlled Senate if served a subpoena, but the upper chamber ultimately voted to bypass witnesses and eventually acquitted Trump of the impeachment charges in two largely party-line votes.
National