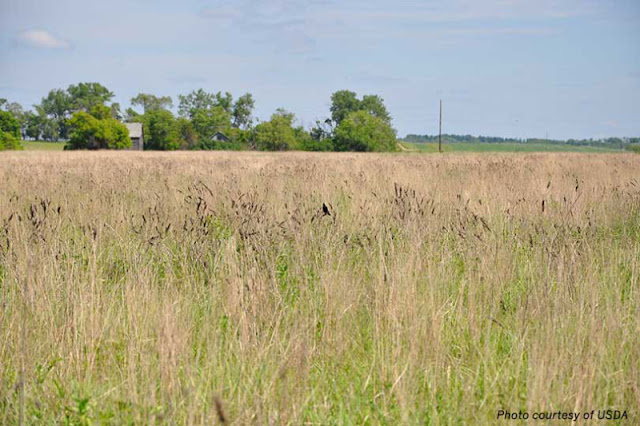 By Jennifer Dorsett
The U.S. Department of Agriculture (USDA) Farm Service Agency (FSA) offered a general Conservation Reserve Program (CRP) signup earlier this year, the first general enrollment offered by the agency since 2016.
And Texans took full advantage of the offering, enrolling more than 540,000 acres in the program.
“Texas was the number one state, not only for acres offered, but also acres accepted,” Richard Fordyce, FSA administrator, said. “There was lots of interest in those historical CRP areas around the Panhandle, and lots of folks taking advantage of this general CRP signup.”
Fordyce told the Texas Farm Bureau Radio Network more than 3.4 million acres across the nation were accepted.
“The general signup is a competitive signup process,” he said. “Landowners have conversations with staff at Farm Service Agency offices and go through some options and choices they can make. Then, they submit an offer. Basically, the landowner says, ‘This is what I can commit to do,’ and there are points allotted to different activities they would undertake with their CRP contract.”
The scores are ranked based on an Environmental Benefits Index (EBI), with points allocated for soil erosion control, water quality improvements, wildlife habitat and other conservation activities.
“There were over 4,000 offers [made in Texas],” Fordyce said. “That could be unique landowners, or a landowner could have made more than one offer, but that tops the list as well in number of offers. So, Texas led the way in almost all of the categories for the general CRP signup this year.”
The goal of CRP is to preserve “environmentally sensitive” land by paying landowners through rental payments and cost-share assistance initiatives. Cost-sharing assistance is available for activities like seeding cover crops and restoring native vegetation.
CRP was first signed into law by President Ronald Regan in 1985. It’s one of the largest private land conservation programs in the U.S. and has helped farmers, ranchers and landowners prevent more than 9 billion tons of soil erosion, sequester an annual average of 49 million tons of greenhouse gases, restore more than 3 million acres of restored wetlands and protect more than 175,000 stream miles with riparian forest and grass buffers.
There are three forms of CRP available to landowners nationwide: general enrollment, continuous enrollment and grasslands enrollment. A fourth program, Soil Health and Income Protection Program (SHIPP), is available only to certain northern states in an area known as the Prairie Pothole region.
Under the competitive general enrollment program, landowners sign a contract with USDA for 10 to 15 years guaranteeing the land will not be farmed or used for ranching during that time.
The grasslands program is similar to general signup, except the land may still be used for grazing, haying and seed production.
Continuous enrollment is open all the time. Offers are automatically accepted if the land and landowner meet certain eligibility requirements and enrollment levels do not exceed the statutory cap.
“The Conservation Reserve Program is one of our nation’s largest conservation endeavors and is critical in helping producers better manage their operations while conserving valuable natural resources,” U.S. Secretary of Agriculture Sonny Perdue said. “The program marked its 35th anniversary this year, and we were quite pleased to see one of our largest signups in many years.”
Farm and Ranch