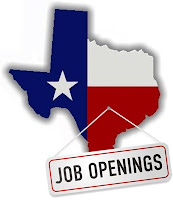 Texas added 318,100 jobs in May, according to seasonally adjusted and benchmarked payroll employment numbers released [Friday] by the Federal Reserve Bank of Dallas. The state lost a revised 1.26 million jobs in April. Year-to-date annualized job growth stands at -19.6 percent compared to annual growth of 2.2 percent in 2019.
Using a top-down model based on national forecasts, COVID-19 infection rates and oil futures prices, the Texas Employment Forecast suggests jobs will decline 3.2 percent this year (December/December). Based on the forecast, 408,000 jobs will be lost in the state this year, and employment in December 2020 will be 12.5 million.
Forecast uncertainty remains elevated as daily infections in the state continue to rise, presenting significant downside risks to the outlook, while high levels of government payments to individuals and companies create upside risks, according to Keith R. Phillips, Dallas Fed assistant vice president and senior economist.
“There was a broad-based rebound across industries in May,” Phillips said. “Jobs in high personal-contact industries, such as restaurants, hotels and personal services, rebounded but remained significantly below February levels. The oil and gas sector was an exception to the May improvement, with jobs declining 52.3 percent following a 65.7 percent decline in April. The jobs rebound was also broad-based across regions in the state.”
The Texas unemployment rate ticked down from 13.5 in April to 13.0 percent in May. Unemployment rates fell in seven of the nine major Texas metro areas in May, according to seasonally adjusted numbers from the Dallas Fed. Unemployment rose in Laredo and was flat in the McAllen–Edinburg–Mission metro area.
The Dallas Fed improves Bureau of Labor Statistics (BLS) payroll employment estimates for Texas by incorporating preliminary benchmarks into the data in a more timely manner and by using a two-step seasonal-adjustment technique. Texas metropolitan-area unemployment rates from the BLS also are seasonally adjusted by the Dallas Fed.
Texas