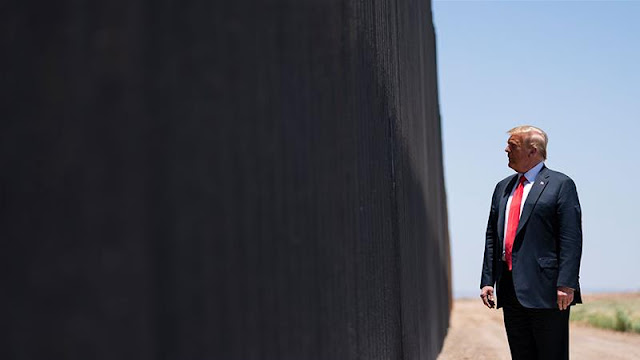 The Supreme Court declined to take a case challenging President Trump’s border wall, leaving in place a decision that rejected environmental groups' quest to stop construction.
The court will not hear an appeal to a case seeking to block construction on 145 miles of wall running along Arizona, California, New Mexico and Texas.
The Center for Biological Diversity, Defenders of Wildlife and other environmental groups filed the cause in January, arguing the Department of Homeland Security did not have the authority to waive environmental requirements to speed construction.
“We’re disappointed that the Supreme Court won’t consider the Trump administration’s flagrant abuse of the law to fast-track border wall construction,” Jean Su, an attorney at the Center for Biological Diversity, said in a statement.
“This administration has made a mockery of the Constitution to build an enormously destructive wall. We’ll continue to fight these illegal waivers and do everything possible to prevent further damage to the beautiful borderlands.”
The administration has faced multiple suits from environmental groups, who have both challenged the wall’s funding and argued it will hurt habitats for threatened and endangered species.
The Pentagon’s February reallocation of $3.8 billion spurred at least three suits, including one by a group of 19 states and another by the American Civil Liberties Union alongside environmental groups.
National