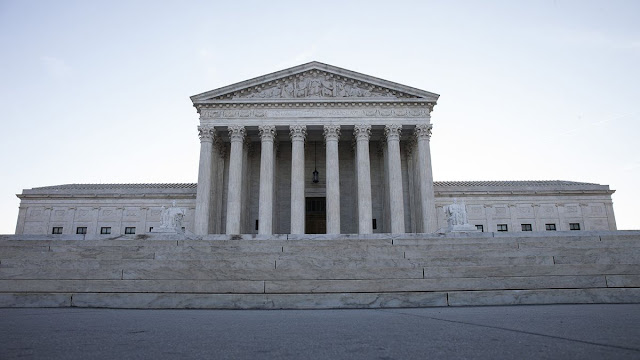 The Supreme Court on Monday struck down a Louisiana abortion law, handing a win to abortion rights advocates who feared the conservative court would break with past rulings to rein in protections that emerged from the landmark decision in Roe v. Wade.
The justices voted 5-4 to invalidate Louisiana’s admitting-privilege law in the first major abortion ruling of the Trump era, which came after the court struck down a nearly identical Texas law four years ago.
The ruling, which underscored the razor-thin voting margin over abortion rights, with Chief Justice John Roberts joining the court's four liberals, is likely to make future Supreme Court decisions over a woman’s right to terminate an unwanted pregnancy an even more pressing issue in the coming presidential election.
The ruling Monday is also the clearest indication yet that the court, which now tilts more conservative with the addition of President Trump’s two nominees, is pursuing a more restrained approach than many abortion rights advocates feared.
In a concurring opinion, Roberts said his vote was guided by deference to prior rulings, particularly the court’s 2016 decision in Whole Woman's Health v. Hellerstedt, which struck down a nearly identical Texas law.
“The legal doctrine of stare decisis requires us, absent special circumstances, to treat like cases alike,” Roberts wrote. “The Louisiana law imposes a burden on access to abortion just as severe as that imposed by the Texas law, for the same reasons. Therefore Louisiana’s law cannot stand under our precedents.”
Justice Stephen Breyer, who penned the majority decision four years ago in Whole Woman's Health, also wrote the majority opinion in Monday’s decision. In addition to Roberts, he was joined by liberal Justices Ruth Bader Ginsburg, Sonia Sotomayor and Elena Kagan.
The Louisiana case arose from a constitutional challenge to a law passed in 2014 by the state's Republican-led legislature. That law, known as Act 620, required physicians who perform abortions to hold “active admitting privileges” at a hospital within 30 miles of their facility.
In practice, this meant abortion-performing physicians had to be members of a nearby hospital’s medical staff, have the authority to admit patients there and be able to perform relevant diagnoses and surgery.
In their Monday decision, the justices reversed an appeals court that found that the Louisiana law did not impose a substantial burden on a large number of women.
Writing for the majority, Breyer said that the Louisiana law’s burden on a woman’s right to an abortion outweighed any medical benefit, applying a similar rationale the court used to strike down the Texas law four years earlier.
“This case is similar to, nearly identical with, Whole Woman’s Health. And the law must consequently reach a similar conclusion. Act 620 is unconstitutional,” Breyer wrote. “The Court of Appeals’ judgment is erroneous. It is reversed.”
National