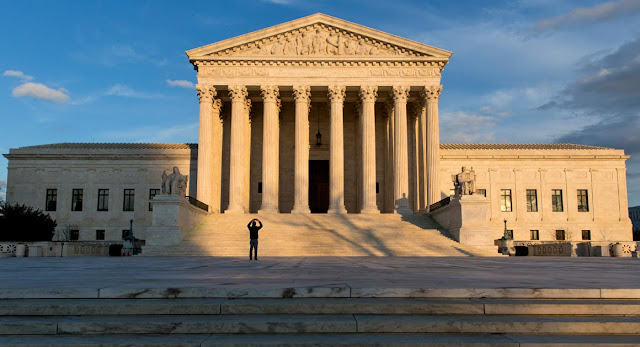 The Supreme Court has delivered two severe blows to the White House and the conservative movement this week on immigration and gay rights, delighting Democrats and activists who were expecting the worst.
The decisions, rejecting President Trump’s rescission of the Obama-era Deferred Action for Childhood Arrivals (DACA) program Thursday and shielding LGBT employees from workplace discrimination Tuesday, disappointed GOP senators and conservative scholars, who were left complaining that justices appointed by Republicans had betrayed them.
And they led to the characteristic explosion on Twitter by Trump, who wrote of the need for new justices after Chief Justice John Roberts ruled against him once, and Justice Neil Gorsuch — a Trump nominee — joined Roberts in ruling against him on the gay rights decision.
This week also saw the court decline Trump’s request to review California's so-called sanctuary laws, which limit cooperation between local and federal authorities. This dealt another setback to Trump’s immigration agenda after the court last term stopped the administration from adding a citizenship question to the census, with Roberts writing the 5-4 opinion.
“The recent Supreme Court decisions, not only on DACA, Sanctuary Cities, Census, and others, tell you only one thing, we need NEW JUSTICES of the Supreme Court,” Trump tweeted. “If the Radical Left Democrats assume power, your Second Amendment, Right to Life, Secure Borders, and Religious Liberty, among many other things, are OVER and GONE!”
Court watchers generally agree that Trump has tilted the court to the right, particularly by replacing the since-retired Justice Anthony Kennedy, formerly the court’s swing vote, with the more conservative Justice Brett Kavanaugh. Trump also added the 54-year-old Gorsuch, the court’s youngest member.
As a result of the bench’s changing composition in recent years, Roberts now figures as something of the new ideological center. But analysts say the chief justice retains a strong conservative bent, which is why many were surprised to see Roberts join the court’s liberal bloc in preserving DACA.
That decision keeps intact a deportation reprieve for nearly 700,000 young undocumented immigrants. But it also upends a key feature of Trump’s immigration agenda and foils a longstanding promise dating back to his 2016 presidential campaign to end Obama’s “illegal executive amnesties.”
By Thursday, after sustaining a pair of landmark Supreme Court defeats, conservatives were describing the court in ever more urgent and even ghastly terms, with Trump calling the decisions “shotgun blasts into the face” of Republicans.
For some conservatives, the biggest surprise this week was the decision by Gorsuch, one of Trump’s hand-picked justices, to vote in favor of expanding civil rights protections to gay and transgender people — a position the administration opposed. Gorsuch and Roberts joined the court’s liberal wing to form a 6-3 majority, with Gorsuch writing the opinion.
“I think some social conservatives who are on the front lines of the culture wars involving the rights of transgender people will be deeply disappointed in Gorsuch,” said Robert Tsai, a law professor and constitutional scholar at American University.
“This issue continues to have electoral salience and it’s possible some will try to make his decision a kind of Souter-like moment, when movement conservatives turned against Souter,” he added, referring to retired Justice David Souter, a Republican appointee who was seen as a disappointment to conservatives due to his tendency to side with liberal justices.
Sen. Josh Hawley (R-Mo.), who clerked for Roberts after graduating from Yale Law School, reacted to this week’s rulings with a sense of betrayal by the court. He said the LGBT decision was a blow to the evangelical conservatives who had been a driving force behind the effort to push the judiciary to the right.
“It represents the end of the conservative legal movement, or the conservative legal project, as we know it,” Hawley said of the decision. “If we’ve been fighting for originalism and textualism and this is the result of that, then I have to say that we haven’t been fighting for very much.”
For their part, Democrats hailed the decisions. Senate Minority Leader Charles Schumer (D-N.Y.) at a press conference Thursday went so far as suggesting the developments had restored his shaken faith in the rule of law.
“In this very difficult time, the Supreme Court provided a bright ray of sunshine this week with the decision on Monday preventing discrimination in employment against the LGBTQ community, and now with this DACA decision," Schumer said. “To me, frankly, the Court's decisions were surprising but welcome and gives you some faith that the laws and rules ... of this country can be upheld.”
As observers across the political spectrum digest the week’s landmark rulings, the court has yet to resolve hot-button disputes over abortion, the Consumer Financial Protection Bureau and subpoenas for Trump's finances as the politically charged docket enters its final weeks.
National