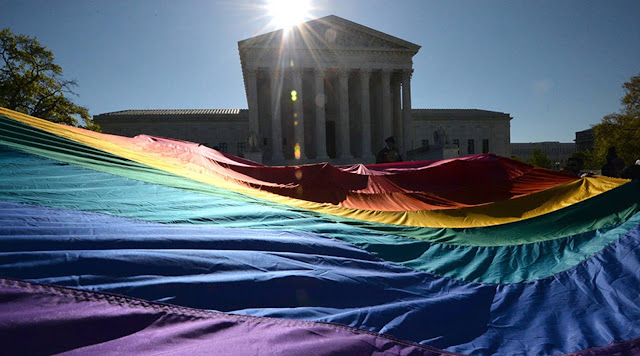 The Supreme Court on Monday ruled 6-3 in a landmark decision that gay and transgender employees are protected by civil rights laws against employer discrimination.
A set of cases that came before the court had asked the justices to decide whether Title VII of the 1964 Civil Rights Act, which forbids discrimination on the basis of "sex," applies to gay and transgender people.
Justice Neil Gorsuch, who wrote the opinion for the six-member majority, said that it does.
"Today, we must decide whether an employer can fire someone simply for being homosexual or transgender," Gorsuch wrote. "The answer is clear. An employer who fires an individual for being homosexual or transgender fires that person for traits or actions it would not have questioned in members of a different sex. Sex plays a necessary and undisguisable role in the decision, exactly what Title VII forbids."
Gorsuch was joined by Chief Justice John Roberts and Justices Stephen Breyer, Ruth Bader Ginsburg, Elena Kagan and Sonia Sotomayor. Justices Samuel Alito, Brett Kavanaugh and Clarence Thomas dissented from the decision.
The decision was one of the most highly anticipated of a Supreme Court term stacked with high-profile cases. It was delivered in the middle of LGBT Pride Month.
The Trump administration had weighed in on the cases, arguing on behalf of a group of employers who had been brought to court for firing their gay or transgender employees. The Department of Justice had argued that the Civil Rights Act did not cover gay or transgender employees.
Last week, the administration similarly finalized a Department of Health and Human Services rule that excludes gay and transgender people from discrimination protections under the Affordable Care Act.
The dissenting justices criticized the majority for projecting what they see as a new meaning on a decades-old law. Alito argued that it is unlikely that lawmakers in 1964 would have sought to protect gay or transgender people from discrimination.
"If every single living American had been surveyed in 1964, it would have been hard to find any who thought that discrimination because of sex meant discrimination because of sexual orientation––not to mention gender identity, a concept that was essentially unknown at the time," Alito wrote in a dissent that was joined by Thomas.
"Many will applaud today’s decision because they agree on policy grounds with the Court’s updating of Title VII," Alito continued. "But the question in these cases is not whether discrimination because of sexual orientation or gender identity should be outlawed. The question is whether Congress did that in 1964. It indisputably did not."
In his own separate dissent, Kavanaugh added, "Our role is not to make or amend the law. As written, Title VII does not prohibit employment discrimination because of sexual orientation."
But Kavanaugh dismissed his fellow conservatives' objections, arguing that "applying protective laws to groups that were politically unpopular at the time of the law’s passage — whether prisoners in the 1990s or homosexual and transgender employees in the 1960s — often may be seen as unexpected."
"But to refuse enforcement just because of that, because the parties before us happened to be unpopular at the time of the law’s passage, would not only require us to abandon our role as interpreters of statutes; it would tilt the scales of justice in favor of the strong or popular and neglect the promise that all persons are entitled to the benefit of the law’s terms," Kavanaugh continued.
National