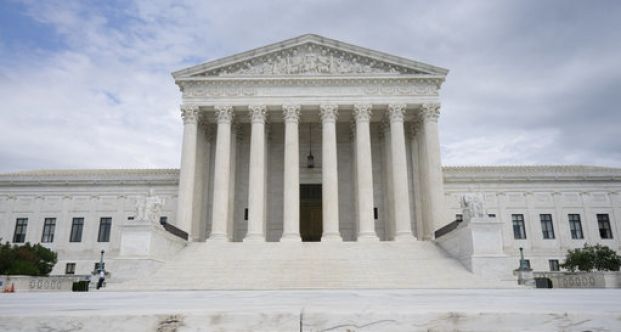 The Supreme Court ruled on Thursday to block the Trump administration from ending an Obama-era program that shields nearly 700,000 young undocumented immigrants from deportation, upending a key feature of President Trump’s immigration agenda.
In a 5-4 decision that largely fell along ideological lines, the justices said the administration failed to give an adequate justification for terminating the Deferred Action for Childhood Arrivals (DACA) program, as required by federal law.
“The dispute before the Court is not whether [Department of Homeland Security] may rescind DACA. All parties agree that it may. The dispute is instead primarily about the procedure the agency followed in doing so,” Chief Justice John Roberts wrote in a majority opinion that was joined by the court's more liberal justices.
The ruling keeps intact a program that is open to an estimated 1.3 million noncitizens who are eligible for DACA by virtue of having been brought to the U.S. as children and who have maintained residency and who meet the education or military service requirements and other criteria.
Trump blasted the ruling as politically motivated and an affront to conservative values.
“These horrible & politically charged decisions coming out of the Supreme Court are shotgun blasts into the face of people that are proud to call themselves Republicans or Conservatives. We need more Justices or we will lose our 2nd. Amendment & everything else. Vote Trump 2020!” Trump tweeted.
The court's decision Thursday does not prevent the Trump administration from working to rescind the DACA program in the future, meaning the fate of the deportation reprieve could be decided by voters in the November general election.
The case traces back to 2012, when then-President Obama established DACA through executive action. Nearly 700,000 people are now enrolled in the program, which grants a renewable two-year deferral from deportation and makes applicants eligible for work permits, driver’s licenses and health insurance.
Trump, who campaigned on a promise to end Obama’s “illegal executive amnesties,” announced plans in 2017 to rescind the program. The move was met with swift legal challenges, and federal lower court judges in three cases ruled against the Trump administration.
Appearing before the Supreme Court last fall, the Trump administration argued that its decision to rescind DACA is not reviewable by courts. A majority of justices rejected that argument Thursday, but several of the court’s reliably conservative members embraced the view in a dissenting opinion.
In his dissent, Justice Clarence Thomas argued that the Obama-era program was “unlawful from its inception,” and that the court should not have second-guessed the Trump administration’s decision to rescind it.
“The Court could have made clear that the solution respondents seek must come from the Legislative Branch. Instead, the majority has decided to prolong DHS’ initial overreach by providing a stopgap measure of its own,” Thomas wrote.
“In doing so, it has given the green light for future political battles to be fought in this Court rather than where they rightfully belong — the political branches,” added Thomas, whose dissent was joined by fellow conservative Justices Samuel Alito and Neil Gorsuch.
The decision to preserve DACA marks the third time Roberts cast the deciding vote on a major Trump immigration policy, and is likely to further cement his image as the court’s new swing vote.
Roberts previously sided with the conservative justices to uphold the administration’s restrictions on inbound travel from several Muslim-majority countries. Last term he joined the liberal bloc to prevent the administration from adding a citizenship question to the 2020 census, based on similar legal grounds as the DACA decision.
In both the census and DACA cases, the Supreme Court’s decision was guided by a federal statute called the Administrative Procedure Act, which concerns how much decision-making power resides with federal agencies. The narrow issue before the court in DACA was whether the Trump administration’s repeal was legally justified or if it was “arbitrary and capricious,” and thus illegal under the act.
In finding that the administration violated the act, Roberts was joined by liberal Justices Ruth Bader Ginsburg, Stephen Breyer and Elena Kagan. Justice Sonia Sotomayor also signed onto the majority opinion, but said she would have left open the possibility of the DACA rescission being challenged on equal protection grounds.
National