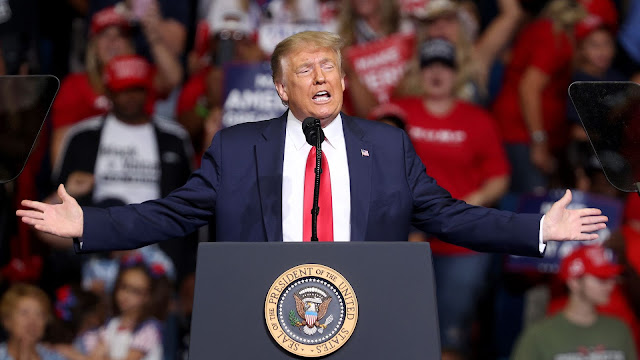 Several staffers on President Trump’s reelection campaign have reportedly entered quarantine this week after interacting with colleagues who tested positive for the coronavirus after attending the president’s Tulsa, Okla., rally last weekend.
A number of top campaign officials are quarantining for the week rather than going into the office, CNN reported, citing two sources familiar with the situation.
A campaign official said on Thursday that staff who were in Tulsa are working remotely and will be tested before returning to the office.
The rally, Trump’s first since the beginning of the pandemic, was held amid a surge in coronavirus cases in Oklahoma, though any increase in cases associated with the event would not yet have appeared in state data due to the lag time for the disease's incubation period.
The Trump campaign said earlier this week that two members of his campaign's advance team tested positive for the virus after attending the rally. The campaign said the two people were wearing masks during the entire event but would quarantine after receiving the positive tests.
Six other members of the campaign’s advance team tested positive before the rally, though they were not allowed to attend the event. Separately, dozens of Secret Service agents have reportedly self-quarantined since the rally.
CNN said Thursday that the staffers who are self-isolating were not identified, but it reported that several campaign surrogates present at the rally have undergone testing after traveling together on a chartered plane without masks.
Tulsa County reported 259 new cases Wednesday, a new high. Overall on Thursday, the state reported 438 new positive cases, bringing the total number since the pandemic began to 11,948. More than 8,500 have recovered from the disease in the state while 375 have died.
Tulsa and Oklahoma City have been the hardest-hit parts of the state, with 2,949 and 2,410 confirmed cases respectively, according to state data.
Other states experiencing spikes in COVID-19 cases include Florida, Texas and California. Texas Gov. Greg Abbott (R) announced Thursday that some re-opening measures in the Lone Star State will be paused.
National