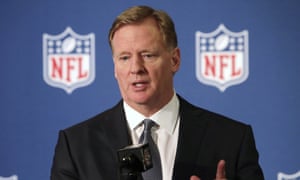 NFL commissioner Roger Goodell on Friday called for peaceful protests against police brutality, reversing past opposition to such demonstrations and saying the NFL admits "we were wrong for not listening" to players earlier.
“We, the NFL, condemn racism and the systematic oppression of black people,” Goodell said in a video statement shared on Twitter.
“We, the National Football League, admit we were wrong for not listening to NFL players earlier and encourage all to speak out and peacefully protest,” he continued. “We, the National Football League, believe black lives matter."
"Without black players there would be no National Football League and the protests across the country are emblematic of the centuries of silence, inequality and oppression of black players, coaches, fans and staff,” he added in the video.
The message comes after players and others had slammed an earlier statement from Goodell last weekend responding to the death of George Floyd, a black man whose death in Minneapolis police custody sparked nationwide protests against racism.
Players had also vowed they would not be silenced as they continued protests and advocacy in the upcoming football season. In a video released this week, players specifically asked the NFL to support black players, call out racism and admit “wrong in silencing our players from peacefully protesting."
The NFL faced controversy over its policies and handling of players taking a knee in protest against police brutality during the playing of the National Anthem at games, most notably during its 2018 season.
At one point the league issued a policy that was later halted due to backlash, which required players to “stand and show respect for the flag and the anthem” when on the field. Under the policy, a club would also be “fined by the league if its personnel are on the field and do not stand and show respect for the flag and the anthem.”
The policy came after President Trump and some conservatives began criticizing protests during the anthem, claiming they were disrespectful to the flag.
Such protests first began with former San Francisco 49ers quarterback Colin Kaepernick in 2016, who kneeled to protest police brutality and the treatment of African Americans in the country. Other players eventually joined him, drawing the ire of Trump.
The issue has come into a renewed light in the wake of Floyd's death as players join Americans across the country speaking out.
Sports