Retail sales soar 17 percent in May 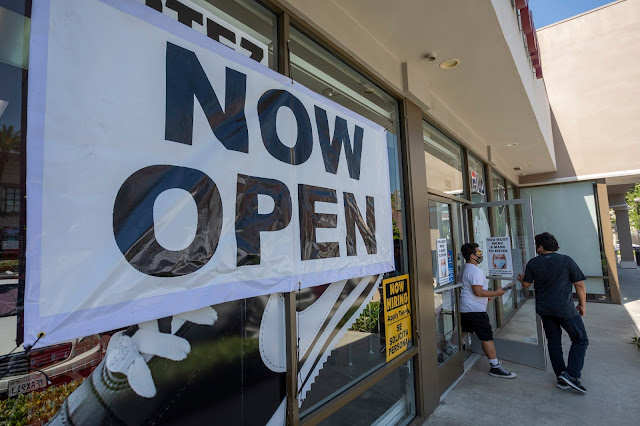 U.S. retail sales rose more than 17 percent between April and May, shattering expectations, as states began loosening restrictions imposed to slow the coronavirus pandemic, according to data released by the Census Bureau on Tuesday.
Retail and food service sales jumped 17.7 percent for May after diving 14.7 percent in April, according to the advance estimate of monthly retail sales released Tuesday. Economists broadly expected retail sales to climb between 7 and 8 percent in May following April’s plunge.
Retail sales minus automobiles and auto parts rose 12.4 percent, while retail stores alone saw a 16.8 percent jump in sales in May.
The sharp rise in May retail sales came as states gradually allowed some nonessential businesses to reopen, including stores and restaurants that had been shut down for nearly two months.
Sales at clothing and accessory stores rose by a staggering 188 percent after falling 75.2 percent in April but still came in 63 percent lower than in May 2019. Sporting goods, hobby, music and book stores saw a 88.2 percent rise in sales from April to May, sales at furniture and home good stores rose 89.7 percent, and sales at electronics and appliance stores rose 50.5 percent
President Trump, whose has often focused his reelection campaign on the state of the U.S. economy, touted the surprising retail gain as a positive sign for the recovery from the COVID-19 recession.
“Wow! May retail sales show biggest one-month increase of ALL TIME, up 17.7%. Far bigger than projected. Looks like a BIG DAY FOR THE STOCK MARKET, AND JOBS!” Trump tweeted.
Retail sales in May were still more than 6 percent below their level in 2019 after plunging in March and April, but last month’s resurgence is the latest flash of hope for a quicker than expected rebound.
The U.S. added 2.5 million jobs in May as 2.7 million workers returned from temporary layoffs, according to the Labor Department, dropping the unemployment rate from 14.7 to 13.3 percent.
National