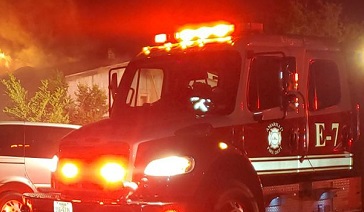 Early Monday morning, the Amarillo Fire Department responded to the 2400 block of Englewood on a reported structure fire.
The fire was reported by a Potter County Sherriff’s deputy that was patrolling the area. This Deputy noticed smoke in the area and located it coming from a residence.
After notifying dispatch, the deputy began knocking on the door to alert anyone located inside the home.
After several attempts, the occupants came to the door. The deputy alerted the family to the fire, entered the home and assisted with removing children from the home.
Smoke detectors were present, but had not activated before the deputy arrived. The first unit arrived at 4:25 am and found a large storage shed on fire.
The shed was immediately adjacent to a mobile home, and fire quickly spread to the nearby residence.
AFD crews entered the home to fight the fire. The fire burned through the roof forcing firefighters inside the residence to evacuate.
After crews exited the building, a defensive strategy was implemented and AFD units were able to keep the fire from spreading to other homes nearby.
The fire was reported to be “Under Control” at approximately 6:00 am.
No injuries were reported and Amarillo Fire Marshal’s Office was requested. Fire Marshal investigators have not released a cause at the time of this release.
Local News