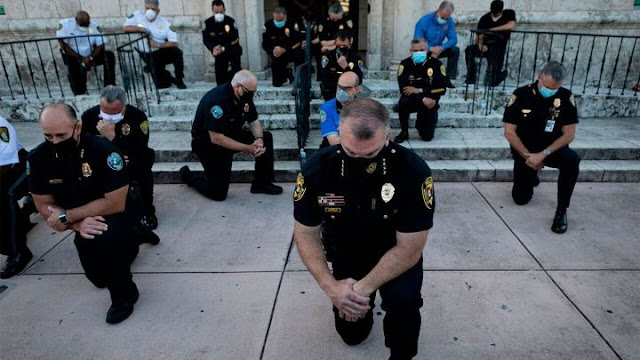 As tensions escalated between police and protestors throughout the nation, some members of law enforcement showed solidarity with demonstrators by kneeling alongside them and participating in marches over the weekend.
The acts came as tensions boiled over in dozens of U.S. cities following the death of George Floyd, an African-American man who died in police custody. Several demonstrations have devolved into chaos, with police firing tear gas on protestors and some individuals smashing storefronts and setting buildings ablaze.
Amid this backdrop, officers in states such as New York, Oregon, Iowa and Kentucky took knees while policing ongoing demonstrations, in acts that replicated the protest started by former San Francisco 49ers quarterback Colin Kaepernick. Law enforcement leaders in Michigan and Virginia also participated in marches alongside protestors.
On Sunday, officers in Queens, N.Y. took a knee with a band of protestors who marched near their precinct. Video of the scene showed dozens of demonstrators cheering as a line of officers knelt alongside many of them. Aleeia Abraham, the leader of The BlaQue Resource Network and the individual who shot the video, told CNN that she'd never seen such a tribute from police.
The move to take a knee was replicated in Portland, Ore., and Lexington, Ky. In Portland, video shared by The Oregonian showed a protestor urging a Portland police officer to show support for their cause by taking a knee. A subsequent clip showed a dozens of officers clad in riot gear kneeling as a crowd of protestors in front of them chanted, “George Floyd.”
A similar scene played out in Lexington, with several officers taking a knee after hearing chants of "kneel with us."
Officers in Des Moines, Iowa, Spokane, Wash., and Miami also took a knee while policing protests on Sunday. One video shared by The Des Moines Register showed two officers kneeling while praying that everyone remain safe during the demonstration.
In Washington, D.C., one officer took a knee while standing in front of line of protestors. A supervisor subsequently yanked him by his collar from the line, according to The Washington Post. The officer later returned and remained standing.
In Michigan, Genesee County Sheriff Chris Swanson took off his helmet and asked demonstrators protesting outside Flint Township police headquarters what they'd like from the officers. After hearing chants of "walk with us," Swanson replied, "let's walk."
"We want to be with y'all for real," Swanson said, pointing to officers standing behind him. "I took my helmet off, they laid their batons down. I want to make this a parade, not a protest."
Norfolk, Va. police chief Larry Boone also joined demonstrators and held a "Black Lives Matter" sign during a march through the streets of the city, according to 13 News Now.
Floyd, 46, died last week shortly after a Minneapolis police officer knelt on his neck for several minutes while executing an arrest. Footage of the arrest showed the officer, Derek Chauvin, keeping his knee pinned to Floyd's neck as Floyd repeatedly said "I cannot breathe."
The actions of the officer, who has been fired and charged with third-degree murder and second-degree manslaughter, prompted intense outrage nationwide and calls for accountability from police. Abraham, the leader of The BlaQue Resource Network, said that the decisions from officers to take a knee was "a good sign."
But she told CNN that "what we’re really looking for is action."
"I’ll be even more impressed when we’re not stepped on and gunned down. That’s the moment I’m looking for," she said.
In the days since Floyd's death, several states and cities have instituted mandatory curfews to help mitigate the unrest. Some states have also deployed the National Guard to help control escalating protests.
National