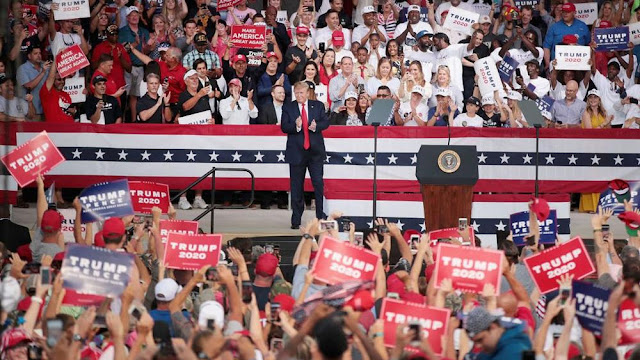 The Oklahoma Supreme Court denied a legal request to require that social distancing be enforced at President Trump’s campaign rally on Saturday, according to media reports Friday.
The decision comes in response to a lawsuit brought by two attorneys on behalf of city residents, businesses and immunocompromised individuals who claimed that the rally would put the community at increased risk of coronavirus infection.
The lawsuit filed Tuesday said that the rally amounted to a “super spreader event." The injunction request did not seek to halt the rally but to require the BOK Center, the venue where the rally is taking place, to enforce social distancing guidelines.
The same day, Tulsa District Judge Rebecca Nightingale rejected the request for an expedited evidentiary hearing and for a temporary injunction, sending the appeal to the state Supreme Court, according to Tulsa World.
The rally is expected fill the 19,000-plus seat arena and the campaign announced it is preparing for an overflow in the number of attendees.
The city has seen a spike of coronavirus cases in the past weeks, and Tulsa Health Department Executive Director Bruce Dart has warned against hosting the rally. He joins other public health officials, including some in the White House coronavirus task force, in advising that large indoor gatherings do not take place.
Attorneys for the BOK Center reportedly argued that the precautions in place by the Trump campaign are sufficient and that the plaintiffs did not show adequate evidence that they would be directly impacted.
State and city officials have said they are expecting roughly 200,000 people to be in Tulsa for the rally. The campaign has said attendees will be given temperature checks, masks and hand sanitizer before entering the arena.
White House press secretary Kayleigh McEnany said Wednesday that attendees will be given masks, but they won't be required to wear them, calling it a “personal decision.”
National