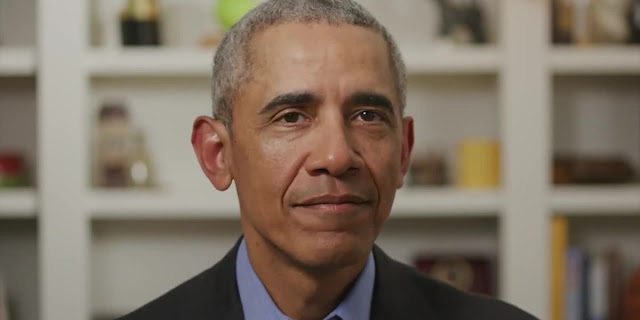 Former President Obama wrote in an essay published Monday that the protests sweeping the nation in response to the death of George Floyd have the opportunity to represent a "turning point for real change" as long as activists channel their anger into "peaceful, sustained, and effective action."
"If we want our criminal justice system, and American society at large, to operate on a higher ethical code, then we have to model that code ourselves," he wrote, adding that the "point of protest is to raise public awareness, to put a spotlight on injustice, and to make the powers that be uncomfortable."
Obama's essay in Medium was published the day after largely peaceful protests Sunday erupted into violent clashes between some demonstrators and police in several cities that night. News cameras caught people looting stores in Santa Monica, while fires were set in Washington, D.C., near the White House.
Obama said that the widespread protests signified the "genuine and legitimate frustration" from the African American community. But he stressed the need to ensure that the demonstrations were orchestrated in a peaceful manner and that the movement continued with broad pushes to elect reform-minded public officials.
The protests Sunday were just the latest in a week in which thousands have gathered across the country to voice outrage over the death of Floyd, an African American man who died in police custody.
Footage of Floyd's arrest, which showed him repeatedly saying "I cannot breathe" as an officer knelt on his neck, prompted widespread calls for more police accountability nationwide.
The protests have led to a massive destruction of public and private property in cities around the country, leading to curfews being established in dozens of cities.
Obama said protests have led to real change in the United States and could do so again, though they would eventually need to be translated into politics.
"In fact, throughout American history, it’s often only been in response to protests and civil disobedience that the political system has even paid attention to marginalized communities," he said. "But eventually, aspirations have to be translated into specific laws and institutional practices — and in a democracy, that only happens when we elect government officials who are responsive to our demands."
"The bottom line is this: if we want to bring about real change, then the choice isn’t between protest and politics. We have to do both," Obama wrote.
Obama said efforts to enact change would be most effective at the local level. The elected officials "who matter most" when it comes to reforming police departments and the criminal justice system work as state, city and county officials, he said.
"Voter turnout in these local races is usually pitifully low, especially among young people — which makes no sense given the direct impact these offices have on social justice issues, not to mention the fact that who wins and who loses those seats is often determined by just a few thousand, or even a few hundred, votes," Obama added.
He concluded the essay by imploring advocates to think about the specific changes they want for their local criminal justice system and police department. The more specific the demands are, the harder it will be for elected officials to just "pay lip service," he argued.
The former president cited a report and toolkit developed by the Leadership Conference on Civil and Human Rights as an outlet to help those efforts.
"Watching the heightened activism of young people in recent weeks, of every race and every station, makes me hopeful," he said. "If, going forward, we can channel our justifiable anger into peaceful, sustained, and effective action, then this moment can be a real turning point in our nation’s long journey to live up to our highest ideals."
Obama has been vocal about the need for criminal justice reform and commented on the issue regularly while he served as president. He said Friday that Americans needed to  “create a ‘new normal’ in which the legacy of bigotry and unequal treatment no longer infects our institutions or our hearts.”
“It’s natural to wish for life ‘to just get back to normal’ as a pandemic and economic crisis upend everything around us,” Obama said. “But we have to remember that for millions of Americans, being treated differently on account of race is tragically, painfully, maddeningly ‘normal.’"
National