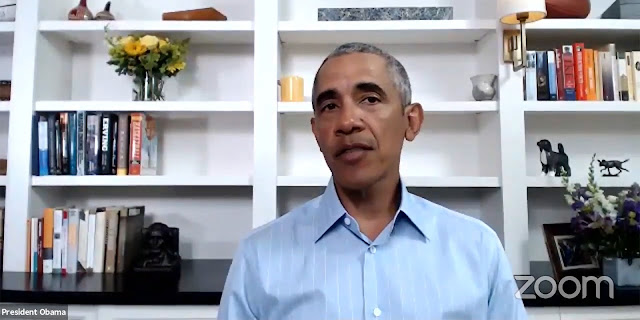 Former President Obama on Wednesday called for police reforms but did not mention President Trump and largely steered clear of the polarizing politics that have wracked the nation following the death of George Floyd.

Speaking at a virtual town hall from his home in the Kalorama neighborhood of Washington, D.C., Obama outlined changes he said would reduce police violence toward racial minorities.

The former president said chokeholds should be outlawed and that officers should not be able to shoot at moving vehicles. He called on local police departments to establish clear use-of-force guidelines and said officers should have to intervene when another officer has become too rough with a suspect.

“I’m urging every mayor in this country to review your use-of-force policies with members of your community and to commit to reforms,” Obama said.

“Let’s go ahead and implement those. We need those in positions of power to say this is a priority,” he added.

The town hall event is the first time Obama has made public remarks about the protests that have swept the nation in response to the death of Floyd, who died last week after former Minneapolis police officer Derek Chauvin knelt on his neck for more than eight minutes.

Minnesota Attorney General Keith Ellison (D) upgraded the charge against Chauvin on Wednesday to second-degree murder. He also charged the three other officers who watched as Floyd died with aiding and abetting.

Obama’s remarks come during a time of historic civil unrest, as thousands of people have taken to the streets to demand justice for Floyd.

The nation’s first black president has generally avoided weighing in on national politics since President Trump took office in 2017, and his highly anticipated public remarks on Wednesday were no exception.

Obama directly addressed Floyd’s family as well as the surviving relatives of other recent victims of police violence.

“The last few months, the kinds of epic changes and events in our country are as profound as anything I’ve seen in my lifetime,” Obama said.

“To those families who’ve been directed impacted, please know that ... we grieve with you, and ... we’re committed to the fight of creating a more just nation,” he added.

Obama did not once mention Trump, whom Democrats have criticized for his hard-line approach to law and order.

Trump endorsed the military’s use of force against protesters who have gathered on the streets around the White House and has demanded that Democratic leaders in major cities crack down on vandals and looters who have destroyed businesses and fought with police.

Obama said Wednesday he was encouraged by the protests, which he described as evidence that a broad, multiracial cross-section of society had “awakened” to social injustices.

“What has happened over the last several weeks is that the challenges and structural problems here in the U.S. have been thrown into high relief,” Obama said.

“The outcomes ... are the result of a long history of slavery, Jim Crow and redlining and institutional racism that too often have been the plague, the original sin of our society. In some ways, as tragic as these past few weeks have been ... they’ve also been an incredible opportunity for people to be awakened to some of this ... an opportunity to work together to tackle them and take them on and change America and make it live to its highest ideals,” he added.

The demonstrations across the country have largely been peaceful but have in some cases been marred by criminal activity, including the looting and destruction of businesses and attacks on the police.

Police clashed with peaceful protesters just outside the White House on Tuesday night as military personnel sought to clear the streets so Trump could visit a nearby church that had been set on fire by vandals.

Obama on Wednesday went out of his way to praise the “vast majority” of law enforcement officials he said were committed to keeping communities safe.

“I want to acknowledge the folks in law enforcement that share the goals of reimagining police,” Obama said. “There are folks out there that took the oath to serve ... have a tough job and are just as outraged by the tragedies. We’re grateful for the vast majority of you who protect and serve ... and have shown restraint and volunteered and listened. Change will require everyone.”

The former president came off the sidelines last month to endorse presumptive Democratic nominee Joe Biden for president. Biden served for eight years as Obama’s vice president, and the two are close friends.

Democrats have been eager to see Obama cut a higher profile with the November election only about five months away.

Polls show Biden opening up a wide lead nationally over Trump, but the race is closer in the battleground states that will determine who wins the White House.

Biden ventured out of his home state of Delaware this week for the first time since the coronavirus outbreak, giving a speech in Philadelphia, which has been wracked by protests.

There, Biden called on Congress to pass new police reforms, such as a ban on chokeholds and laws prohibiting local police departments from using military-grade equipment.

The former vice president also criticized Trump’s leadership during the tumultuous week of unrest, accusing him of stoking racial tensions and lacking empathy needed to unite the nation.