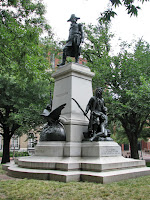 Earlier this month, during unrest in American cities, there was a lot of attention paid in Washington, D.C., to the area just outside the White House. As we continue into July, I don’t want to let an unfortunate but little-noted consequence of what happened there to be forgotten.
Not far from the White House stands a statue of Thaddeus Kosciuszko. As has become increasingly common, the statue became a target of impassioned effacement. It was not taken down, but its base was tarred by graffiti.
Defacing the Kosciuszko monument belongs in the same category of historical ignorance as efforts to topple the Emancipation Memorial, statues of Civil War general and racially progressive president Ulysses S. Grant, and a statue of abolitionist immigrant and Union soldier Hans Christian Heg. As detailed, among other places, in The Peasant Prince: Thaddeus Kosciuszko and the Age of Revolution by Alex Storozynski, Kosciuszko, born in 18th-century Poland, came to America early on in the American Revolution, motivated entirely by his belief in its justness as a cause. He played an important role in the Revolution, helping the revolutionaries to win the Battle of Saratoga and to build West Point, among other efforts.
After the war, Kosciuszko returned to his native Poland, hoping to accomplish there what he had helped to do in America. He assisted in the drafting of Poland’s Constitution (Europe’s first), helped to lead Poland’s military struggle against Russian invasion, then led an uprising against Russia’s conquest. During this time, he issued the Proclamation of Poleinac, which significantly curtailed serfdom in Poland. Kosciuszko ultimately lost the battle for Poland, was captured, and was sent to Russia. His nation became absorbed within Russia.
Eventually, he was released and returned to America, furthering friendships with such luminaries as Thomas Jefferson, with whom he debated slavery. Kosciuszko worked out an arrangement with Jefferson that the latter use the former’s will to free slaves and provide for them after their liberation. Jefferson, however, reneged on this, to his immense discredit. Kosciuszko’s life, moreover, ended sadly: He died in Switzerland, a man without a country, Poland’s borders having been erased.
We rightly cherish the memory of this important, forward-thinking man, an immigrant who showed his dedication to liberty and equality on two continents (in even more ways than I detailed here) yet faced resistance to his ideals in his own lifetime. Again, if those who see in every statue just another old-looking figure to be violently belittled knew even a little bit about history, they might have shown some forbearance about this one. At any rate, we should wish the best of the efforts, encouraged by the mayor of Warsaw and the Polish ambassador to the United States, to keep this statue worthy of the man it honors.
Opinion