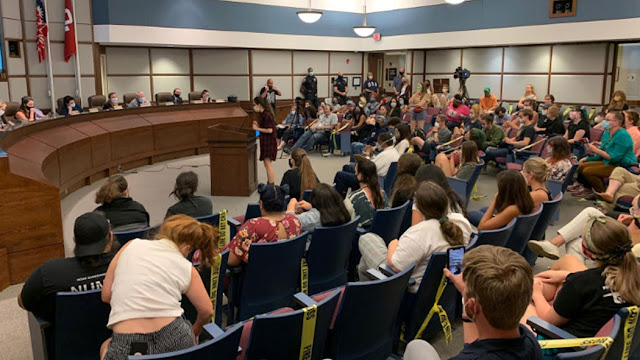 The city council in Norman, Okla., has voted to cut $865,000 from the local police department’s budget and redirect most of the funds to community outreach efforts in the region amid local protests calling for the police to be defunded.
According to a report from News 9, the council approved the cut toward the end of a heated 11-hour meeting that began on Tuesday and ran into early Wednesday. Footage of the meeting, which reportedly ended after 3 a.m., showed locals clashing with each other at one point.
The cuts were approved in an overwhelming vote, with just one councilor opposing, a local Fox affiliate reported, and will be primarily targeting department members’ benefits and wages.
In a statement to News 9 on Wednesday, Councilwoman Katie Bierman told the station she understands the cut will result in some job losses for the local department, which reportedly has a budget of more than $30 million, but she added that there are other ways that money can serve the community.
“While I recognize that jobs are lost, there are opportunities there,” she said. “If we lose one patrol officer, we might be able to hire two drug counselors, and are able to provide twice as good of service to the community in that particular area.”
It’s unclear which efforts the money will go toward supporting just yet. According to the station, the city council will decide which programs the funds should be redirected to next month.
The report comes as local legislators across the country are facing pressure from protesters to redirect funds from police departments toward other community programs following the police killing of George Floyd, Breonna Taylor and other African Americans.
National