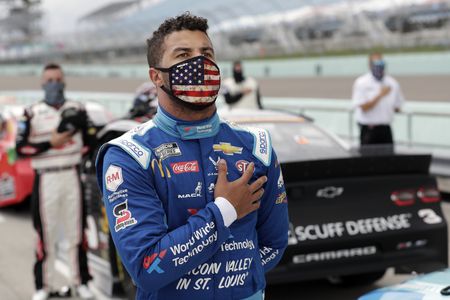 NASCAR announced Sunday that a noose was found in the garage stall of Darrell "Bubba" Wallace Jr. at Talladega Superspeedway in Alabama, just weeks after the racing circuit's only African American driver emblazoned a "Black Lives Matter" message across his car and successfully pushed the organization to ban displays of the Confederate flag.
NASCAR said in a statement that it launched an immediate investigation into the matter, noting that it is "angry and outraged" by the "heinous act."
"[We] will do everything we can to identify the person responsible and eliminate them from the sport," it said. "As we have stated unequivocally, there is no place for racism in NASCAR, and this act only strengthens our resolve to make the sport open and welcoming to all."
In a message posted on Twitter, Wallace said that Sunday's "despicable act of racism and hatred leaves me incredibly saddened and serves as a painful reminder of how much further we have to go as a society and how persistent we must be in the fight against racism."
The incident involving Wallace comes amid a national discussion that has forced lawmakers, schools, companies and sports leagues to confront racial injustice and certain symbols that many believe are rooted in racism. Following the May 25 death of George Floyd at the hands of the Minneapolis police, Wallace was vocal about the need for NASCAR to ban the Confederate flag from its events.
The racing circuit announced on June 10 that the battle flag would be barred from all of its events and properties, saying that its presence "runs contrary to our commitment to providing a welcoming and inclusive environment."
Wallace and Richard Petty Motorsports revealed that same day that he would drive a black car with the phrase "Black Lives Matter" emblazoned across it. Wallace’s No. 43 Chevrolet also included the message "Compassion, Love, Understanding" across the hood along with an image of a Black hand and a white hand clasping.
"This statement that we have right here that we're about to make — running this racecar, being on live television on Fox — I think it's going to speak volumes for what I stand for but also what the initiative that NASCAR, the whole sport, is trying to push,” Wallace said at the time of the unveiling.
Wallace, 26, in 2018 became the first full-time Black driver in the top-flight NASCAR racing series since 1971. He said that he's been "overwhelmed"  in recent weeks by the support he's received from people across the racing industry, including other drivers and team members.
"As my mother told me, 'they are just trying to scare you.' This will not break me, I will not give in nor will I back down. I will continue to proudly stand for what I believe in."
National Sports