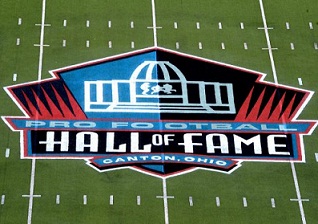 The NFL's Hall of Fame Game scheduled for August has been cancelled due to coronavirus concerns, marking the first major event the league has cancelled due to the pandemic.
The game, slated for Aug. 6 in Canton, Ohio, was set to feature the Dallas Cowboys and Pittsburgh Steelers and be broadcast on NBC.
The Pro Football Hall of Fame announced Thursday that the game would be rescheduled for August 2021. The annual Hall of Fame enshrinement ceremony will also be postponed.
“The health and safety of our Hall of Famers, fans and volunteers who make Enshrinement Week so special remains our top priority,” David Baker, president and CEO of the Pro Football Hall of Fame, said in a statement.
“The Hall will honor the Centennial Class of 2020 next August, along with what promises to be an equally spectacular Class of 2021, as part of a multi-day celebration of football with an atmosphere that will deliver for fans ‘Twice the Fun in ’21.’”
Those who were set to be inducted into the Hall of Fame this year include Steve Atwater, Isaac Bruce, Steve Hutchinson, Edgerrin James and Troy Polamalu as well as coaches Bill Cowher and Jimmy Johnson. Three contributors, including NFL Films' Steve Sabol, former commissioner Paul Tagliabue and New York Giants general manager George Young, were also set to be inducted this year.
Training camp is currently scheduled to begin on July 28, but is expected to be a topic of discussion during a Thursday conference call, NFL Network's Ian Rapoport reported.
The NFL held its draft virtually this year, with no fans in Las Vegas, with the event drawing an average audience of 8.4 million people over three days on ABC, ESPN, ESPN Deportes and NFL Network.
Several professional athletes have tested positive for COVID-19 recently, including players in the NFL and Major League Baseball (MLB) as both leagues attempt to return to the field.
MLB announced earlier this week that a limited "spring" training would begin on July 1, with a 60-game regular season set for July 24 without fans in the stands.
The NFL still expects to go ahead with its season starting shortly after Labor Day with fans in attendance, but cautioned that could change based on conditions on the ground.
Sports