Monuments, statues associated with the confederacy and racism coming down in Texas 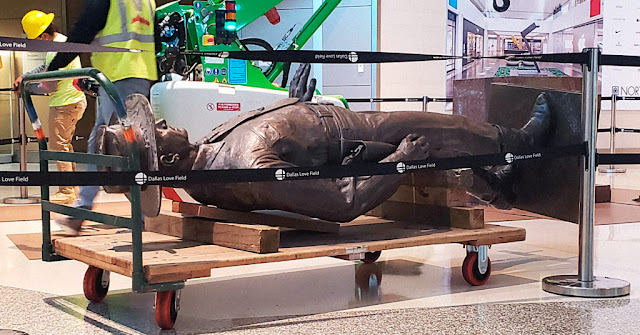 Monuments, statues and even names associated with the confederacy and racism are coming down or being changed in the wake of two weeks of protests about police brutality and racism following the death of George Floyd.

Tarrant County’s monument has sat in front of the county courthouse in Fort Worth since 1953. It was paid for by the United Daughters of the Confederacy.

“It only honors those veterans who took up arms against Americans and their descendants,” said Commissioner Roy Brooks, who led the vote to remove the marker.

The Denton County decision came after a change.org petition drive garnered 31,000 signatures in support of removing the monument. It also sits in front of a county courthouse and was erected in 1918 by the United Daughters of the Confederacy, which has included members of the Ku Klux Klan.

Denton activist Terrell Peterson has wanted for years for the monument to be taken down. He talked with The Dallas Observer about yesterday’s decision.

“Do you really want any of your potential students of color — or any students — to see that? Because they will immediately think that this town is racist and maybe think twice about moving here,” he said.

In Dallas, staffers at Love Field have taken down a sculpture of Texas Ranger Jay Banks.

“A recently published excerpt from a forthcoming book and image of the Texas Ranger depicted in the sculpture led to OAC and DAL deciding the sculpture should be relocated to storage until a broader community dialogue about its display in a prominent location can take place,” said airport spokesperson Christopher Perry in a statement to Reform Austin. “The sculpture was a donation to the city in 1963 when policies requiring the extensive review of public art donations were not in place.”

The excerpts were published by D Magazine and are part of Doug Swanson’s book “Cult of Glory: The Bold and Brutal History of the Texas Rangers.”

Swanson told KXAS-TV that Banks was involved in keeping black children out of a school in Mansfield, Texas in 1957. A photo of the Ranger shows him leaning against a tree outside Mansfield High School as a dummy in blackface hung from a noose above the school.

Officials have not yet decided what to do with the ranger statue and the monuments in Denton and Tarrant Counties.

Even the military is signaling a willingness to change. On Monday, the Pentagon announced it is open to removing the names of Confederate heroes from Fort Hood and nine other Army posts, reversing resistance to the idea expressed just three months ago.

Fort Hood, the largest U.S. military installation in the world, is named for Gen. John Bell Hood of Kentucky, a West Point graduate who fought for the Confederacy.

“Things are moving in the right direction,” said Killeen NAACP Past President Roosevelt Huggins to the American Military News. “We understand it and the reasoning for the Army now wanting to revisit the conversation. … Now is the time to do it.”