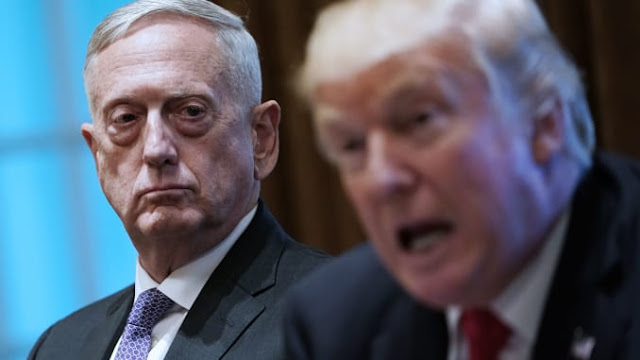 “I have watched this week’s unfolding events, angry and appalled,” Mattis wrote in a statement to The Atlantic.

“The words ‘Equal Justice Under Law’ are carved in the pediment of the United States Supreme Court. This is precisely what protesters are rightly demanding. It is a wholesome and unifying demand—one that all of us should be able to get behind. We must not be distracted by a small number of lawbreakers,” he added.

Mattis said Trump is the first president in his lifetime “who does not try to unite the American people—does not even pretend to try.”

Mattis urged Americans to “unite without him.”

“This will not be easy, as the past few days have shown, but we owe it to our fellow citizens; to past generations that bled to defend our promise; and to our children,” Mattis wrote.

Mattis’s decision to speak out seems to have been sparked by Trump’s threat on Monday to deploy U.S. troops to states to quell protests as well as by law enforcement firing tear gas and rubber bullets at protesters outside the White House before Trump walked to the nearby St. John's Episcopal Church to take a photo.

“When I joined the military, some 50 years ago, I swore an oath to support and defend the Constitution. Never did I dream that troops taking that same oath would be ordered under any circumstance to violate the Constitutional rights of their fellow citizens—much less to provide a bizarre photo op for the elected commander-in-chief, with military leadership standing alongside,” Mattis wrote.

Mattis resigned in December 2018, shortly after Trump announced plans to pull all U.S. troops out of Syria.

He has been reluctant since then to criticize the president publicly. Last year, he told The Atlantic he felt there was a period in which he owed his silence, adding that “it’s not eternal.”

In response to the criticism, Trump called Mattis the “world’s most overrated general” and swiped at his leadership capabilities, claiming that the retired four-star Marine general’s strength was not his military prowess “but rather personal public relations.”

“Probably the only thing Barack Obama & I have in common is that we both had the honor of firing Jim Mattis, the world’s most overrated General. I asked for his letter of resignation, & felt great about it. His nickname was ‘Chaos’, which I didn’t like, & changed to ‘Mad Dog,’” the president tweeted Wednesday evening.

“His primary strength was not military, but rather personal public relations. I gave him a new life, things to do, and battles to win, but he seldom ‘brought home the bacon’. I didn’t like his “leadership” style or much else about him, and many others agree. Glad he is gone!” Trump continued.