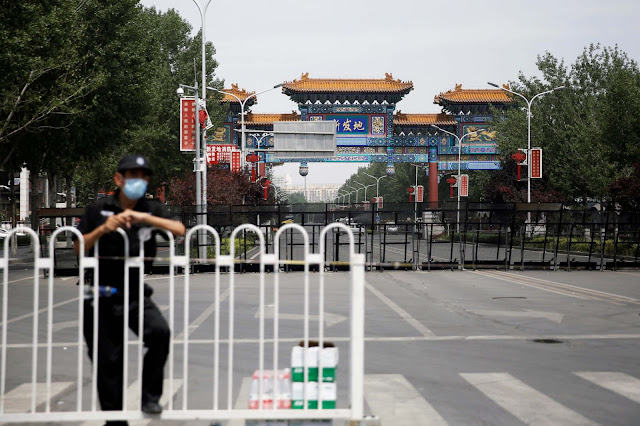 Beijing expanded its lockdowns on Tuesday, closing a third neighborhood amid a new coronavirus outbreak.
Chinese officials are attempting to contain the new outbreak as the capital city has recorded 106 cases of COVID-19 through the end of Monday, The Associated Press reported. On Monday, the country reported 40 new cases nationwide, including 27 in Beijing.
Authorities locked down seven residential compounds in the Xicheng district, where the first case was detected, and prevented residents from leaving the city if they are from high-risk areas.
Most of the new cases can be traced back to the Xinfadi wholesale food market, and the city offered testing to anyone who had visited the market in the past two weeks or come in contact with someone who did.
Wu Zunyou, the chief epidemiologist at the Chinese Center for Disease Control and Prevention, told the state broadcaster CCTV that the spread started among market workers but officials caught it early enough to contain it, according to the AP.
The Xinfadi market has been closed for cleaning, along with a second market where three cases were found. Lockdowns were implemented in the residential communities around both communities, which house 90,000 people, the AP reported.
Authorities also said fresh meat and seafood in the city was being inspected. Media reports said salmon had been removed from shelves in 14 cities after the virus was found in a sample from a salmon cutting board, but experts say they don’t think the virus can spread through food supplies.
The resurgence in China is leading public health experts to caution other countries that are beginning to reopen. The Chinese government had declared victory over the virus, which is believed to have originated in Wuhan, in March.
World