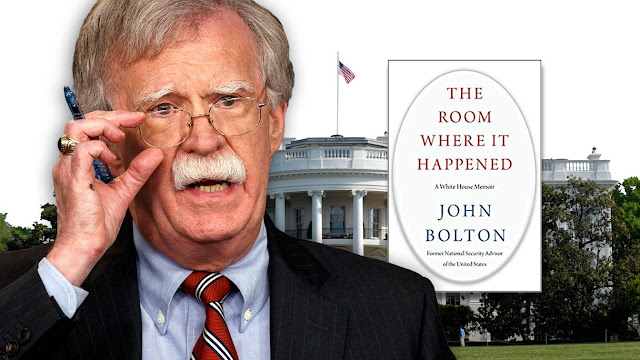 A federal judge appeared skeptical on Friday about the Trump administration's effort to block former national security adviser John Bolton from releasing his new tell-all memoir next week.
Judge Royce C. Lamberth said at a hearing that there seems to be little he could do to stop the book titled "The Room Where it Happened: A White House Memoir" from being made widely available at this point, with stores across the country set to put it on sale Tuesday.
"The horse, as we used to say in Texas, seems to be out of the barn," Lamberth said. "It certainly looks difficult to me about what I can do about those books all over the country."
But the judge, who was appointed to the federal district court in D.C. by former President Reagan, also suggested that Bolton may have violated his nondisclosure agreements with the government by moving forward with the book's publication before receiving written approval from the National Security Council (NSC).
"I don't really understand why he decided to take that risk," Lamberth said, suggesting that Bolton should have sued the government when he realized written approval would not be forthcoming.
The Trump administration is asking for a temporary restraining order halting the book's publication before its planned release as the lawsuit plays out. The Department of Justice (DOJ) is accusing Bolton of violating nondisclosure agreements he signed when he joined the White House that prohibit him from disclosing any classified or sensitive information.
David Morrell, an attorney for the Justice Department, said that even at this late stage the government is still pursuing a ruling that condemns the book's publication.
"Your Honor, there is a massive interest that the government has here in ensuring that authors who become disgruntled, don't like the process, aren't able to just bail out" and publish their material, Morrell said.
Bolton's lawyers argue that the White House is trying to delay the book's publication until after the election, given its deeply negative portrait of President Trump and his administration, as reported by multiple media outlets that received advance copies.
"The speech has been spoken, it can't now be unspoken, Your Honor," said Charles Cooper, an attorney for the former national security adviser. "So the most distressing piece of this is that what the purpose of this proceeding really is is not truly judicial, it's theater, it's to use your courtroom as a stage."
Late last year, Bolton submitted a draft of his book to the NSC for a standard prepublication review to determine if it contained any classified information. After months of editing the manuscript to comply with NSC's recommendations, Bolton was told in late April that the book no longer contained classified material and that he should await a letter informing him that the review had officially been completed, according to court documents.
That letter never came, and Bolton was informed that the NSC was conducting a second review of the book by a more senior official, Michael Ellis, the White House's senior director of intelligence.
Ellis said he identified more passages in the book containing classified information, further delaying the prepublication approval.
On June 16, Ellis sent Bolton a draft of his book with major redactions, removing passages detailing internal White House conversations and "portraying President Trump in an unflattering light," Bolton's lawyers told the court. The DOJ sued Bolton that day.
Lamberth appeared concerned about the fact that the government seemed to backtrack on its assurance that the manuscript no longer contained classified material.
"Why weren't the objected portions identified earlier?" he asked the DOJ's attorney.
Morrell responded that Ellis, as a more senior government official, was privy to more information and thus better equipped to identify sensitive information in the draft.
Lamberth also asked whether any of the information that Ellis objected to was classified after Bolton's book was tentatively cleared in April. Morrell admitted that Ellis classified at least one passage during his review.
The DOJ's effort to obtain a preliminary injunction faces significant legal challenges, particularly First Amendment limitations on the government's ability to halt the publication of information. Complicating the administration's argument is the fact that advanced copies have already been widely distributed.
Earlier this week, a reporter brandished a copy of the book while asking questions of the White House press secretary during a press conference.
"The Room Where it Happened" is highly critical of Trump's handling of foreign policy, particularly his appreciation of China and its president, Xi Jinping.
Still, if Bolton is able to move forward with the book's planned release, the DOJ is asking the court to seize any profits from its publication, citing a Supreme Court precedent from 1980 forfeiting the royalties a former CIA officer made on a book about his time in Vietnam that circumvented prepublication review.
Lamberth may be more receptive to that argument, as he posed tough questions to Bolton's attorney about the decision to proceed with the book's publication without express authorization.
The judge is expected to decide on whether to issue a restraining order in the next few days.
National