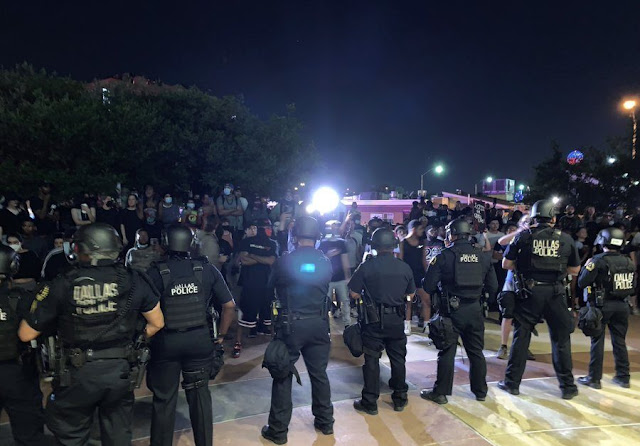 Gov. Greg Abbott today declared a state of disaster for all Texas counties. The order follows a weekend of protests about the death of George Floyd, a black man who grew up in Houston, at the hands of police in Minneapolis last week. Under the declaration, the governor has the ability to designate Federal Bureau of Investigation agents to serve as Texas Peace Officers.
The FBI tactical teams join 1,000 Texas National Guard troops and thousands of Texas Department of Public Safety troopers in assisting local law enforcement in Houston, Dallas, San Antonio and Austin.
“Every Texan and every American has the right to protest, and I encourage all Texans to exercise their First Amendment rights,” said Abbott. “However, violence against others and the destruction of property is unacceptable and counterproductive.”
Abbott said that those committing violence, vandalism or looting will be arrested and prosecuted.
“As protests have turned violent in various areas across the state, it is crucial that we maintain order, uphold public safety, and protect against property damage or loss. By authorizing additional federal agents to serve as Texas Peace Officers, we will help protect people’s safety while ensuring that peaceful protesters can continue to make their voices heard,” he said.
According to the Houston Chronicle, 274 demonstrators were arrested on Saturday through early Sunday in Houston. Police have not yet issued a more specific number on how many were taken into custody from the downtown protest. Another 137 were arrested during Friday’s protests, which resulted in damage to more than a dozen police cruisers.
In a news conference Saturday, Houston Mayor Sylvester Turner appealed to Houstonians to alert law enforcement if they know of plans for violent or destructive rioting.
In Dallas, Police Chief Renee Hall has instituted a curfew beginning at 7 p.m. until 6 a.m. for the next several days.
“These rioters, these looters, they have become extremely aggressive, and our enforcement efforts have escalated,” said Hall at a news conference. “We will not tolerate anymore damage to our city.”
The “March/Rally for Black Lives and Freedom” that had been scheduled at the state Capitol in Austin for Sunday was canceled by organizers due to rumors that other groups would attempt to hijack the event and cause violence.
Despite cancelation of the event, Austin police reported thousands of protestors on the streets in downtown Austin.
In San Antonio, which is also under a curfew, businesses across the street from the Alamo and at nearby Rivercenter Mall were damaged, WOAI Radio reported. Police fired tear gas and rubber bullets at the vandals, who were also throwing rocks at officers. Three police officers were injured.
Floyd died after a white Minneapolis police officer knelt on his neck for nine minutes. On a video shot by a bystander, Floyd, who was in handcuffs, can be heard pleading to be let up and saying he could not breathe.
Texas