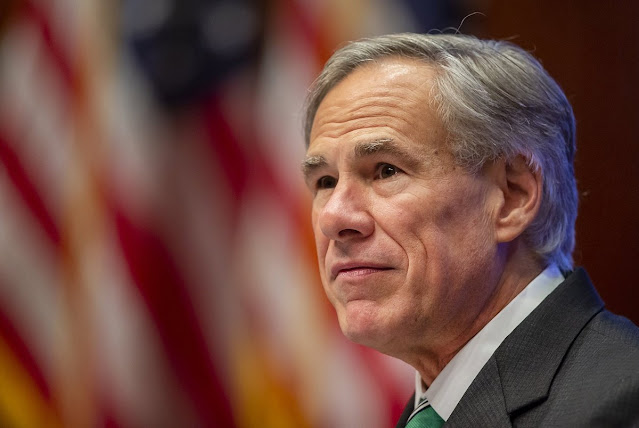 By Cassandra Pollock
Gov. Greg Abbott traveled to Houston on Monday to attend the public visitation of George Floyd, a black man who was killed recently in Minneapolis police custody. Abbott told reporters afterward that Floyd’s death was “the most horrific tragedy I’ve ever personally observed” and signaled an openness to pursuing policing reforms in the future.
Abbott also told reporters that he was heading to meet with Floyd's family privately.
Floyd, whose death has sparked protests across the state and nation in recent days, was a longtime resident of Houston’s historically black Third Ward before moving to Minneapolis a few years ago, according to The Houston Chronicle. Floyd died after a white police officer kneeled on his neck until he lost consciousness and for minutes afterward. He was 46. Protesters in Texas have invoked his death, along with local police shooting deaths, to call for reforms in policing.
Thousands are expected to attend Monday’s public visitation of Floyd, which is being held Monday afternoon at the Fountain of Praise Church in Houston. Floyd is set to be buried in Houston next to his mother on Tuesday after a private memorial service, according to ABC13.
“Today is a sad day. Ever since his death has been a sad day,” Abbott said, adding he would express his condolences to the family and give them a flag flown over the Texas Capitol in Floyd’s honor.
"George Floyd has not died in vain," Abbott said. "His life will be a living legacy about the way that America and Texas responds to this tragedy. I’m here to tell you today that I am committed to working with the family of George Floyd, to ensure we never have anything like this ever occur in the state of Texas."
Abbott said that "discussions about the pathway forward" would not be taken over by lawmakers, but would be spearheaded by family members, victims and others "who have suffered because of racism for far too long."
"Several things are already beginning to change," Abbott said in response to a reporter question. "When we get to the Texas Legislature, discussions have already begun. Remember this: Texas has a legacy of success, whether it be the Timothy Cole Act, the Sandra Bland Act and now maybe the George Floyd Act to make sure that we prevent police brutality like this from happening in the future in Texas."
There have been numerous high-profile cases of police killing black people in Texas, several of which have occurred in the last few years and led to widespread calls for police reform. In his recent comments about the death of Floyd, Abbott has not mentioned recent Texas cases currently under investigation or in court, like the police shooting deaths of Mike Ramos in Austin or Atatiana Jefferson in Fort Worth.
Ramos was unarmed and driving away from officers when he was fatally shot in Austin in late April. Jefferson was shot through her bedroom window last year after police arrived for a welfare check. Her family’s lawyer has said she was inside her home playing video games with her nephew when police shot her.
In the days since protests against police brutality have filled the streets of Texas' biggest cities, Abbott has touted criminal justice reforms Texas has implemented in recent years. The state has been closing prisons as it has reduced its inmate population and has, through the Tim Cole Act, been a leader in compensating people wrongly convicted of crimes.
But efforts fizzled in 2019 to update the bail process among concerns that the current system violates the civil rights of poor defendants. And the family of Sandra Bland, a black woman found dead in a rural Texas county jail days after being arrested during a routine traffic stop, expressed disappointment in 2017 when a bill named after Bland was watered down to exclude provisions that would have created more rules for how police conduct consent searches, mandated officers received training on understanding implicit biases and prohibited arrests for offenses that normally only warrant a ticket. In 2019, when some lawmakers again pushed to include a key piece of the original act — limiting arrests for non-jailable offenses — the proposal again died, with one Democrat blaming one of the state’s top police unions.
Abbott also said that members of the Legislature he's spoken with already have listed inadequate law enforcement training as a main challenge — and emphasized how better training is needed "before a police officer goes out on his first patrol." The Legislature is next scheduled to convene in January 2021.
Last week, Abbott said he would speak with Floyd’s family first before determining whether to attend Floyd’s burial.
“This is gonna be their choice,” Abbott told KFDX. “They need to have the opportunity to celebrate the life of George Floyd the way that’s most appropriate, and we want to do all we can to support the family.”
Abbott is not the only high-profile official scheduled to meet with Floyd’s family. Democratic presidential candidate and former vice president Joe Biden will also travel to Houston on Monday to meet with the family, according to CNN.
Patrick Svitek and Jolie McCullough contributed reporting.
This article originally appeared at the Texas Tribune.
Texas