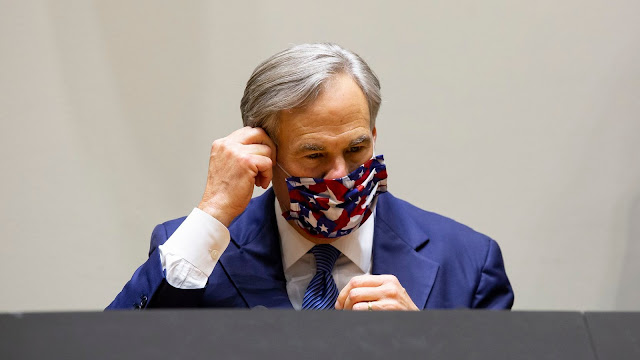 Texas Gov. Greg Abbott (R) will allow the city of Austin to mandate that private businesses require face masks under penalty of fines as the state sees an alarming spike in coronavirus cases.
Mayor Steve Adler (D) issued the order Wednesday, shortly after Abbott said he would allow a similar rule for Bexar County, according to the Austin American-Statesman. The guidelines issued by Adler require all businesses in the city to “develop and implement a health and safety policy or plan related to COVID-19” that must at minimum require facial coverings.
The order allows exemptions for people in “a separate single space,” either indoors or outdoors, and for people eating or drinking in a restaurant or bar or people with members of the same household.
“During this time, we will transition to a more direct order on masks, working with our business community so our whole city moves forward together and so that everyone can get prepared,” Adler said in a statement.
The Bexar County order, meanwhile, fines businesses up to $1,000 for failure to implement such a policy.
Abbott’s previous orders had prevented counties or cities from penalizing individual people who do not wear masks.
“There has been a plan in place all along that all that was needed was for local officials to actually read the plan that was issued by the state of Texas,” Abbott said in an interview Wednesday with KWTX-TV in Waco.
The announcement comes as Texas, one of the first states to begin lifting pandemic restrictions, has seen a spike in recent cases of the virus. The Lone Star State set a new single-day record for virus cases Tuesday, reporting 4,098.
While Abbott, as well as Florida Gov. Ron DeSantis (R) and Arizona Gov. Doug Ducey (R), have argued the increase is a result of expanded testing, public health cases have warned the percentage of positive tests is also up.
Texas