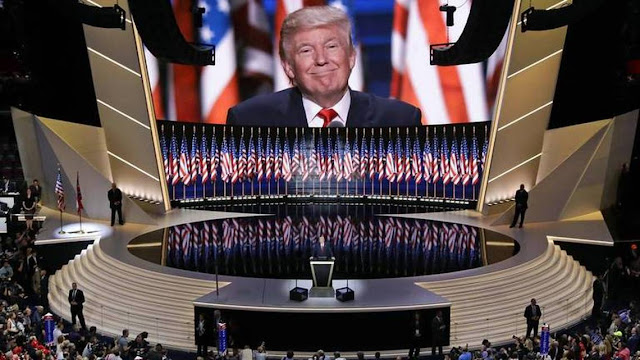 The Republican National Convention will move its main events, including President Trump's acceptance speech as the party's nominee, to Jacksonville, Fla., the GOP announced Thursday night.
The move comes after a break with the governor of North Carolina over whether the massive gathering could take place in Charlotte, its originally planned location, without social distancing precautions.
"We are thrilled to celebrate this momentous occasion in the great city of Jacksonville," GOP chairwoman Ronna McDaniel said in a statement. "Not only does Florida hold a special place in President Trump’s heart as his home state, but it is crucial in the path to victory in 2020."
The party's official business will still take place in Charlotte, the party said in a news release. But most festivities, including speeches, will now occur in Jacksonville in late August.
Trump will deliver his speech on Aug. 27 at the VyStar Veterans Memorial Arena, which holds around 15,000 people.
Florida is among more than 20 states that have seen coronavirus cases increase over the last two weeks as businesses are allowed to reopen. There have been more than 2 million confirmed cases total in the U.S.
The shift in location was expected and follows a weeks-long battle between Trump and North Carolina Gov. Roy Cooper (D) over what the convention would look like amid the coronavirus pandemic. The event typically attracts thousands of politicians, donors and media members and is the type of gathering health experts have outlawed to curb the spread of the virus.
The Democratic convention is still scheduled to take place in Milwaukee, though officials have discussed the possibility that it will be held virtually or in a modified form to allow for social distancing.
Trump demanded the Republican convention be allowed to move forward without restrictions on crowd size, and he opposed the idea of requiring masks or spacing out attendees. Cooper indicated he would not be able to commit to those terms given the uncertainty of the pandemic, and the two sides were unable to reach an agreement.
As a result, the GOP will have two months to organize an event that typically takes two years to put together.
The Republican National Committee voted unanimously on Wednesday night to conduct the official business of the convention in Charlotte with roughly 300 delegates, a fraction of the thousands who would typically attend.
The organization also determined that most committees will not meet, including the platform committee, meaning the party will carry over the 2016 platform for this year's election.
National