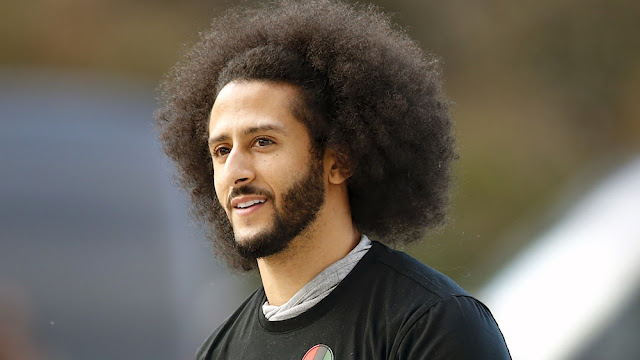 NFL Commissioner Roger Goodell said Monday that he would "support" and "encourage" an NFL team to sign former 49ers quarterback Colin Kaepernick after facing criticism for not addressing Kaepernick's situation during a recent statement on racial issues and the league.
During an interview with ESPN anchor Mike Greenberg, Goodell said that the league should have "listened to our players earlier" on issues of race and the protests against police brutality during the national anthem's performance before games, a practice Kaepernick is credited with starting.
“If he wants to resume his career in the NFL, then obviously it’s gonna take a team to make that decision. I welcome that, support a club making that decision and encourage them to do that,” Goodell said, as reported by Associated Press.
“We should have listened to our players earlier including Colin Kaepernick, Eric Reid, Kenny Stills, Malcolm Jenkins and so many people really brought these issues to light," he added.
Goodell raised the prospect, however, that Kaepernick may wish to pursue activism without rejoining a team.
“I hope we’re at a point now where everybody’s committed to making long-term, sustainable change,” Goodell told ESPN. “If his efforts are not on the field but continuing to work in this space, we welcome him to that table and to help us, guide us, help us make better decisions about the kinds of things that need to be done in the communities.”
Kaepernick has remained unsigned since 2017, shortly after his protests against police brutality attracted national attention and criticism from conservatives. The Seattle Seahawks brought the former 49ers QB in for a workout that year, but declined to sign him.
Goodell had faced criticism on social media following an address earlier in June in which he apologized for the NFL not addressing racial issues sooner but did not mention Kaepernick by name.
The address and interview come as the U.S. faces massive, widespread protests over the death of black Americans in police custody. Video of the arrest of George Floyd in Minneapolis first sparked demonstrations weeks ago, which have continued as activists have demanded reform to law enforcement.
National Sports