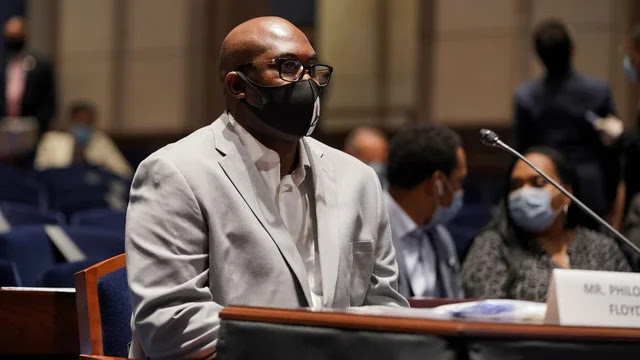 Philonise Floyd said Wednesday that he's seeking only one thing from Congress in the wake of his brother's killing two weeks ago: "Justice for George."

Floyd spoke the words Wednesday morning in the Capitol as he headed into a hearing of the House Judiciary Committee to examine police brutality and Congress's role in preventing it.

Once the hearing began, he offered an emotional opening statement as he described watching the video of his brother's death. A Minneapolis police officer, who has since been fired and charged with second-degree murder, pinned George Floyd to the street for nearly nine minutes by placing his knee on Floyd's neck for eight minutes and 46 seconds.

"I couldn’t take care of George that day he was killed," Philonese Floyd testified. "But maybe by speaking with you today, I can make sure that his death would not be in vain."

"George called for help and he was ignored. Please listen to the call I’m making to you now, to the calls of our family, and the calls ringing out in the streets across the world."

Floyd said that, "I can't tell you the kind of pain you feel" while watching a video like the one of his brother's death.

"I didn’t get the chance to say goodbye to Perry while he was here. I was robbed of that," Floyd said, referring to his brother with a nickname, as he tried to hold back tears.

Floyd's death — the latest in a string of unarmed African Americans killed in encounters with police — has led to days of protests across the nation calling for police reforms.

Congressional leaders of both parties have vowed tougher laws aimed at reining in racial profiling and police brutality.

Rep. Karen Bass (D-Calif.), the chairwoman of the Congressional Black Caucus, is leading that charge in the House. On Tuesday, she introduced legislation to bring more accountability to policing by, among other things, mandating body cameras, outlawing chokeholds and creating a federal database exposing officers with patterns of abuse.

Entering Wednesday's hearing, Bass said she's hoping the witnesses will guide the legislation as it moves through Congress in the coming weeks. George Floyd's death, she added, has opened the public's eyes to systemic problems in the criminal justice system, providing Congress with a unique opportunity to address them.

"I believe we're at a real inflection point in our country," Bass said.

The House Judiciary Committee is expected to advance Democrats' police reform legislation next week, with a vote on the House floor likely to come the following week.

Other witnesses at Wednesday's hearing include Benjamin Crump, the lawyer for George Floyd's family, as well as civil rights advocates and law enforcement.

Three witnesses are appearing at the request of Republicans on the Judiciary Committee: Dan Bongino, a conservative radio show host; Angela Underwood Jacobs, whose brother David Underwood was shot during recent protests in Oakland, Calif.; and Darrell Scott, an African American pastor who is an ally of President Trump.

In the Senate, Majority Leader Mitch McConnell (R-Ky.) has tapped Sen. Tim Scott (R-S.C.), the only black Republican in the upper chamber, to lead a group in drafting the GOP's alternative to the House Democratic bill.

President Trump has had a contentious track record on issues of race since entering the White House, and he's been highly critical of the protesters who have taken to the streets — a vast majority of them peacefully — following Floyd's death.

Yet Scott met Tuesday with White House officials, including chief of staff Mark Meadows, who are now voicing support for some type of federal response to Floyd's killing.

"I think he wants to solve the problem," McCarthy said.