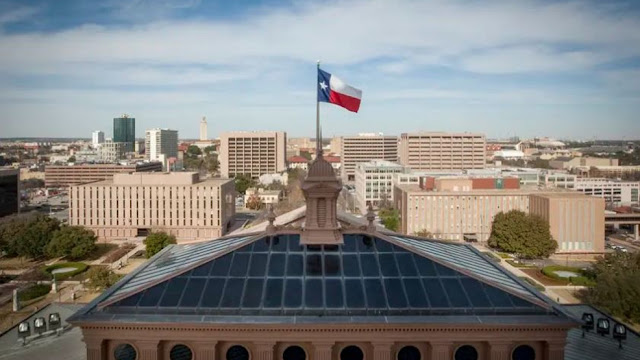 By Ross Ramsey
After more than a week of nationwide demonstrations sparked by the killing of George Floyd, a black man from Houston, in Minneapolis police custody, top Republican politicians in Texas are suddenly allergic to racism.
High-ranking state officials are busy disowning GOP county chairs and activists — and perhaps even a statewide elected official — for social media posts juxtaposing a Martin Luther King Jr. quote with a banana, to conspiracy theories that Floyd’s killing was staged, to unsubstantiated claims that the protests were designed and financed by a liberal billionaire.
Meanwhile, Texas Democrats are had their state convention last week — online, instead of in convention centers and hotel ballrooms — but the Texas Republicans are doing them more good than all of the online speeches and pep rallies ever could.
The earth-shattering events of 2020 are fueling a lot of difficult but necessary conversations about our society. At the same time, they are framing the election season that lies ahead. Between the pandemic, an oil price crash, a lingering economic bust and most recently, widespread demonstrations about police brutalizing black people and about racism in general, the political table is set.
Where to start?
Social media posts of racist conspiracy theories about Floyd’s death from GOP chairs in several Texas counties, including two of the largest?
The chair-elect of the Harris County GOP, who posted a Martin Luther King quote with a picture of a banana? He led his apology with this: “Words and images have power.” No kidding.
Texas Agriculture Commissioner Sid Miller went whole hog in a post Sunday morning: “Folks this is not a protest. It is a well orchestrated attack on America's major cities with plans to attack the police, riot, loot, and burn buildings. The so-called ‘protestors’ are, in fact, domestic terrorists who were organized and paid for by George Soros to further divide our country. These terrorists were bused into these large cities. We must repel this attack and hold those responsible for their actions. This must be brought to a stop now or we will lose control of our country!”
If all of that resulted from a Democratic conspiracy, it’s a masterpiece of political mud-slinging.
You can see that Republicans think it’s a dumpster fire.
Texas Republicans at the top of the food chain — Gov. Greg Abbott, Lt. Gov. Dan Patrick, former Texas House Speaker Joe Straus, U.S. Sen. Ted Cruz, U.S. Rep. Michael McCaul among them — were quick to disassociate themselves and their party from the local chairs spouting crazy racist conspiracies and to start calling for their resignations. It’s not hard to see why they’re reacting, especially with the Democrats gathered virtually for a state convention, and with the streets filled for more than a week with concerned Americans seeking talk and action about racial divisions in the U.S., particularly about police violence against black people.
Why would anyone who will be looking for votes and other support — not to mention a harmonious and productive society — want to get on the wrong side of that?
The problem with that runaway strategy is at the top of the Republican Party, in the White House. In a single day, President Donald Trump’s talk of sending troops to American cities, followed by a Bible-waving photo op in front of a church near the White House, might have been enough. The topper — police and military personnel clearing the way to St. John’s through a nonviolent crowd with flash-bang grenades, tear gas and rubber bullets — was enough to bring harsh words from the same generals Trump used to brag were solidly at his side.
Local and state officials might add some nuance here and some empathy there. Abbott did that just last week, saying he wanted violence and vandalism to stop while making a point of saying he supports the right to protest, that Floyd was “murdered,” and that he understands why all of those demonstrators are demanding change.
That wasn’t exactly a manifesto, but it’s a lot softer than what the president has been saying, with his talk of “dominance” and his threat to send U.S. military troops to police American cities.
Republicans on the ballot this year are going to have to run on this guy’s coattails. The officials who don’t have to run — a category that includes the governor, the lieutenant governor and most of the other elected statewide executives — will be working with whomever gets elected. Texas Democrats need nine votes to win back the state House majority they lost in 2002. That would give them a bit of leverage in drawing new political maps after this year’s census. It would tilt the tables a bit.
Republicans think they can hold them off, maybe even win a few seats back. But November’s outcome will depend on all of the usual things: turnout, issues, the economy, the personalities of the candidates.
The issues are real wild cards. The economy is in the ditch right now and isn’t likely to snap magically back into order before Election Day. The coronavirus isn’t going anywhere, and barring a medical miracle, will still be a serious concern through the rest of the year and into 2021. Floyd’s killing has raised a perennial thought that this is the incident that will prompt real conversation about police use of force, about institutional and systemic racism, and about setting the course for a fair society.
Add it up, and you have the makings of an upset in November. It’s hard to know what an election is going to be about until it’s upon you. Late-breaking information can turn the tide in a close race; that’s what they call an October Surprise, in capital letters.
But the greater frame of an election cycle — the events, trends and conditions that deeply influence voters’ views of the world and the country, that animate their wishes for what should be left alone and what needs to change — gets set long before people vote.
About now, perhaps.
This article originally appeared at the Texas Tribune.
Opinion