Empower Texans staff make fun of Gov. Abbott for being in a wheelchair 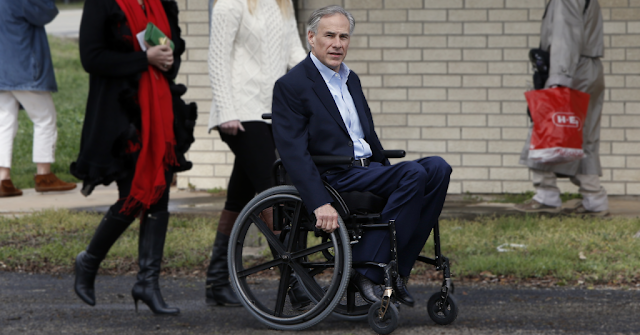 In a podcast full of F-bombs and other expletives, Empower Texans General Counsel Tony MacDonald and staffer Cary Chesire are caught mocking Gov. Greg Abbott for his disability.
The audio doesn’t appear to be available on the site where the Tea Party-aligned organization posts its podcasts, but Quorum Report Editor Scott Braddock obtained a copy and has shared it on his website.
On the recording, the two can be heard talking of having Abbott “wheel himself out there” and then demanding that he “stand firm,” two obvious references to the fact that the governor is confined to a wheelchair. There is also a reference to Abbott being “a revolting piece of s**t.”
The subject of the podcast, which is known as the “Texas Scorecard,” was Abbott’s handling of requests for mandatory face mask orders. He is allowing cities and counties to enact local orders requiring businesses to require face masks for all customers and staff. He has not agreed to a statewide order.
“It reveals a lot about an organization’s character and morals that uses profanity to mock a person in a wheelchair, and this audio is disgusting and hate-filled,” stated Abbott spokesperson John Wittman. “It is sad to think about what else this group may be saying about people behind their backs when they think they aren’t being recorded. Regardless of this despicable tape, the governor remains keenly focused on containing the spread of COVID-19, while also unifying the state as we celebrate Juneteenth.”
Lt. Gov. Dan Patrick called the podcast outrageous, vulgar and completely unacceptable.
Former Empower Texans employee Zach Maxwell called the sentiments and words vile.
Empower Texans CEO Michael Quinn Sullivan issued the following statement: “I am heartbroken by the language and tone used by Tony McDonald and Cary Cheshire. Both have been suspended from all public activities with the organization immediately, and additional internal actions will be taken. Whether it was a private conversation or not is unimportant; it was wrong and unacceptable. I have already sent a personal apology to Gov. Abbott.”
Abbott has been confined to a wheelchair since becoming partially paralyzed after an Oak tree fell on him during a run when he was 26 years old.
Texas