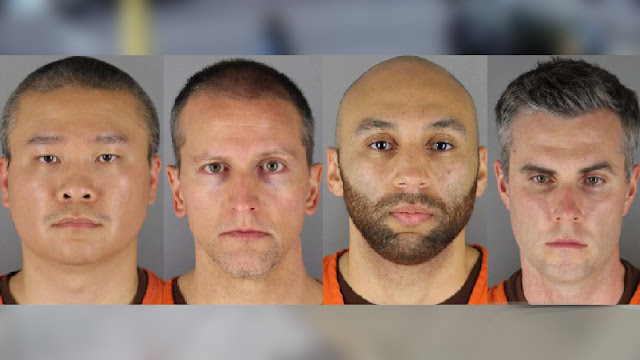 Ellison also charged Tou Thao, J. Alexander Kueng and Thomas Lane — the other officers who were at the scene of Floyd's death — with aiding and abetting second-degree murder Wednesday afternoon at a press conference.

Over the weekend, Gov. Tim Walz switched control of the case to Ellison, which gave him the ability to strengthen the charges.

The Justice Department and the FBI have also opened investigations into the killing of Floyd.

Earlier on Wednesday, Ben Crump, the attorney representing the Floyd family, demanded that Thao, Kueng and Lane be charged before Floyd’s memorial service on Thursday.

Before Ellison officially announced the strengthening of the charges, Crump praised Ellison's decision in a joint statement with the Floyd family.

“This is a bittersweet moment for the family of George Floyd,” the joint statement said. “We are deeply gratified that Attorney General Keith Ellison took decisive action in this case, arresting and charging all the officers involved in George Floyd’s death and upgrading the charge against Derek Chauvin to felony second-degree murder.”

"This is a significant step forward on the road to justice, and we are gratified that this important action was brought before George Floyd's body was laid to rest," Crump said in the statement. "This is a source of peace for George's family in this painful time."

The statement also urged Ellison to go even further and raise the murder charge to first-degree, which carries a life sentence.

"These officers knew they could act with impunity, given the Minneapolis Police Department's widespread and prolonged pattern and practice of violating people's constitutional rights," the statement said. "Therefore, we also demand permanent transparent police accountability at all levels and at all times."

With a first-degree murder charge, prosecutors would need to prove that Chauvin’s killing of Floyd was premeditated.

Nationwide protests over Floyd’s death and the treatment of black Americans by the country’s law enforcement and justice system have erupted in the past week. In many cities, tension between protesters and law enforcement boiled over, leading to violence, looting and property damage. Nearly two dozen states and Washington, D.C., have mobilized their national guards.