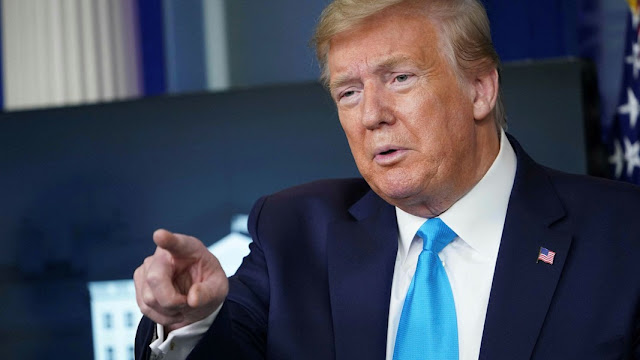 A group of conservative leaders and White House allies wrote to President Trump and Senate Majority Leader Mitch McConnell (R-Ky.) on Tuesday urging them to halt talks on further coronavirus relief bills, arguing that "runaway government spending is the new virus afflicting" the economy.
Twenty fiscal hawks wrote to the two leaders as Congress mulls the scope and necessity of another round of legislation to boost the economy amid the coronavirus pandemic. The signatories argued that additional government spending will hinder the country's economic recovery, contending that the payroll tax holiday Trump has advocated would be more effective.
"To ensure the economic health of our citizens and the financial well-being of our nation now and for years and decades to come, we urge that the multi-trillions of dollars of federal government debt spending in the wake of the coronavirus come to a stop," the letter states. "There is no limit to worthy causes, but there is a limit to other people’s money."
The letter noted Congress has already authorized more than $4 trillion in spending on coronavirus relief efforts. The authors warned that further government involvement would produce a ballooning federal budget that they described as a "road to financial ruin."
The letter is critical of current unemployment benefits offering some workers more money than they would receive if they returned to work, an issue White House officials have said will be addressed in future legislation.
The authors present an alternative plan to repeal the payroll tax to incentivize hiring and work. The idea, while supported by the president, has garnered minimal traction in Congress, where lawmakers have reasoned a payroll tax would do little to address the underlying causes of the economic downturn.
The letter was organized by the "Save Our Country Coalition," a collaboration of conservative groups formed earlier this year as the economy cratered due to the pandemic. Signatories to the letter include conservative economists Stephen Moore and Arthur Laffer, former Sen. Jim DeMint (R-S.C.), former Attorney General Ed Meese, Americans for Tax Reform president Grover Norquist and Tea Party Patriots co-founder Jenny Beth Martin.
Some of the letter organizers have close ties to the Trump administration. Moore was an economic adviser to the Trump campaign and was nominated to the Federal Reserve board before withdrawing amid controversy.
Trump has awarded the Presidential Medal of Freedom to Laffer and Meese, praising their contributions in the Reagan administration.
The Democratic-led House has approved an additional $3 trillion in additional stimulus measures to aid the economic recovery from the coronavirus pandemic, which forced states to shutter businesses and urge residents to remain in their homes for weeks to slow the spread of the disease.
While Democrats and some economists have insisted that lawmakers should press forward with additional legislation to aid businesses and workers, White House officials and Republicans are taking a more deliberate approach.
National Economic Council Director Larry Kudlow said earlier this month that he expected formal discussions on another relief package to resume in early July, noting that he has been holding “informal” conference calls with bipartisan members of Congress on next steps.
Kudlow noted that Trump has expressed interest in a payroll tax holiday for workers, business tax deductions for restaurants and entertainment, liability limitations, and infrastructure investment but didn’t detail specific measures under discussion.
Among the sticking points between Democrats and Republicans is additional fiscal aid for state and local governments who have seen revenues dwindle amid the pandemic.
A sustained economic turnaround will be critical to Trump’s reelection chances. The president and his allies were buoyed by a stronger than expected May jobs report, but economists warn that the country has a long way to go to a sustained recovery.
The unemployment rate remains at 13.3 percent, levels not seen since World War II. In addition, the number of Americans who permanently lost their jobs increased in May.
National