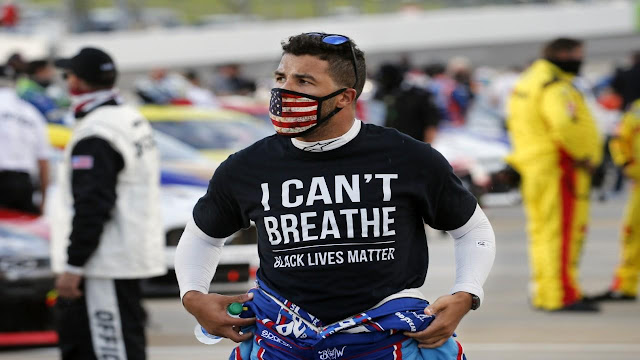 NASCAR driver Darrell “Bubba” Wallace said Wednesday he is “relieved” after an FBI investigation determined he was not the target of a hate crime after a noose was found in a garage assigned to him at Talladega Superspeedway in Alabama.
“It’s been an emotional few days,” Wallace said in a statement on Twitter.
“First off, I want to say how relieved i am that the investigation revealed that this wasn’t what we feared it was.”
He thanked his team, NASCAR and the FBI for “acting swiftly and treating this as a real threat.”
“I think we’ll gladly take a little embarrassment over what the alternatives could have been,” he added. “Make no mistake, though some will try, this should not detract from the show of unity we had on Monday, and the progress we’ve made as a sport to be a more welcoming environment for all.”
NASCAR said Sunday a noose was found in a stall assigned to Wallace, the racing circuit’s only African American driver.
The FBI said Tuesday its investigation found that the “noose found in garage number 4 was in that garage as early as October 2019,” adding that “nobody could have known” Wallace would be assigned that garage number last week.
NASCAR had announced the noose was found just weeks after Wallace emblazoned “Black Lives Matter” across his car and successfully pushed NASCAR to ban displays of the Confederate flag.
Wallace has said he didn’t see the noose, but was shown images of it. He said he was informed by the president of NASCAR on Sunday night about the incident.
Despite the findings of the investigation that the noose had been there since 2019, NASCAR and Wallace are not walking back comments calling what was found and reported to be a noose.
“Whether tied in 2019 or whatever, it was a noose," Wallace told CNN’s Don Lemon Tuesday night. "So it wasn't directed at me, but somebody tied a noose.”
NASCAR President Steve Phelps similarly told reporters during a teleconference Tuesday the investigation found the “noose that was in the garage had been in the garage previously.”
“The last race we had there in October, that noose was present and it was the fact that it was not found until a member of the 43 team came there,” Phelps said.
“To be clear, we would do this again,” he added. “The evidence that we had, it was clear we that needed to look into this.”
Sports