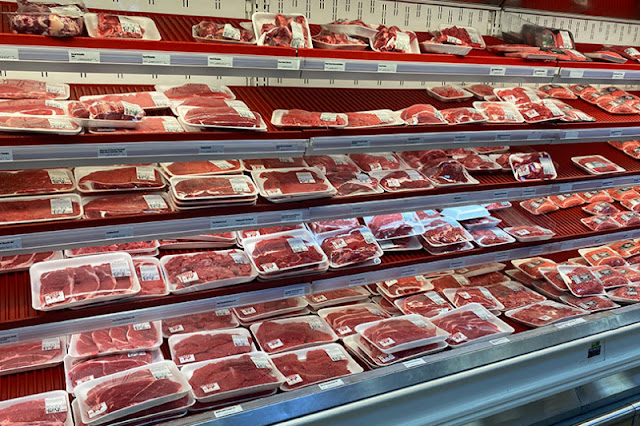 By Jessica Domel
An increase in purchases of red meat at the beginning of the coronavirus pandemic and closures of some meat processors led to disruptions in the supply chain, a temporary shortage of beef in some grocery stores and higher prices for consumers.
But beef and meat sales at grocery stores remained strong.
“As a matter of fact, the last 10 weeks have each been similar to a holiday week at retail with double digit increases over the previous year in both volume, as well as dollars,” Russell Woodward, a senior manager at the Texas Beef Council, told the Texas Farm Bureau Radio Network.
Through the end of May, total ground beef sales at retail have increased by more than $1 billion over the same time period last year.
“That just indicates that people are still consuming their protein products, including beef, and they’re going to the grocery store to buy that,” Woodward said. “During that time period, we have seen those bottlenecks occur in our supply capacity, which caused retailers to put limits on some products in the meat department, and even with those limits—some have been eased now—they have still seen a 24-percent increase in meat department sales and an 18-percent increase in volume. So, consumers are continuing to clamor the meat department.”
Early in the pandemic, there were some issues as consumers were panic buying beef. That, combined with some beef processors reducing capacity to ensure employee safety and other issues, led to shortages and purchase restrictions at some retailers.
“As we know, there was plenty of cattle, and the amount of beef being produced was limited, but we still had plenty out there going to our grocery stores,” Woodward said. “They would limit those purchases for time periods so that everybody could have some to buy.”
That also led to some changes in price.
“I think retailers a few weeks prior to (Memorial Day), as they were securing their products for those sales weeks, kind of went into panic-buying mode themselves a little bit, and certainly drove the wholesale price of beef higher. Those increased wholesale prices have been passed on to consumers. So, in April, we did see an increase in retail prices. Even so, consumers continue to purchase the product,” Woodward said.
As the supply chain begins to recover, retail prices are expected to return to normal.
“What we are seeing (in June) is a pretty strong rebound in production of all the major proteins—beef, pork and broilers—from where we were (in May),” Mark Jekanowski, World Agricultural Outlook board chair, said.
Woodward noted online sales of beef and other groceries have remained strong during the pandemic.
“As we watched this unfold, it’s been interesting to see the consumers’ response to everything and how we have changed in lots of different ways. Some of those are going to remain. E-commerce has jumped up and become much more prevalent,” Woodward said. “I think 80 percent of consumers now have used some sort of e-commerce platform to buy groceries or do some sort of restaurant interaction and have product delivered to them. I believe we’ll continue to see that.”
Farm and Ranch