Back on the campaign trail: Trump to hold rally in Oklahoma next week 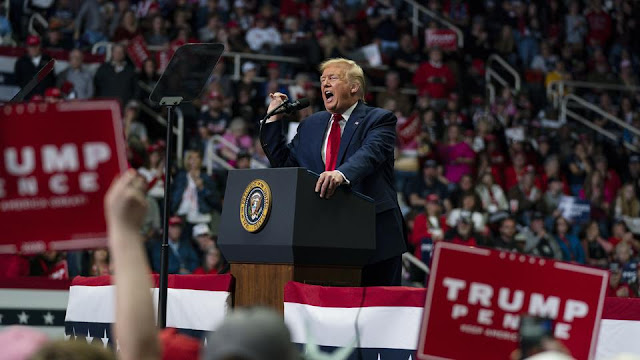 President Trump said Wednesday that he plans to hold his first campaign rally in over three months in Tulsa, Okla., next Friday.

“We’re going to start our rallies back up now. We’ve had a tremendous run at rallies, I don’t think there has been an empty seat since we came down on the escalator,” Trump told reporters Wednesday, referencing the launch of his 2016 presidential campaign.

Trump said the rally in Tulsa would take place in a “beautiful new venue” and he noted that the state has “done a great job with COVID.”

Trump identified states in which he plans to hold rallies on Wednesday afternoon during a roundtable discussion with African American administration officials and conservative media personalities.

It’s unclear what safety measures the campaign may implement in order to prevent the spread of COVID-19 at the large gatherings, which typically attract thousands of the president’s supporters. Trump said Wednesday the rallies would be “big.”

The Trump campaign confirmed earlier this week that it is planning to restart rallies, which have been paused amid the coronavirus pandemic, in the next two weeks.

Florida, Texas, Arizona and North Carolina are among states that have seen a spike in coronavirus cases and hospitalizations as governors across the country loosen restrictions meant to curb the spread of the virus so that businesses can reopen.

Trump has already vowed to move the Republican National Convention from Charlotte, N.C., because the state’s Democratic governor said the RNC would need to plan for a scaled-down convention with fewer attendees, social distancing and face coverings. He said the rally there would happen “at the appropriate time” and said he had “no choice” but to move the convention to another state.

Trump, who has been largely confined to the White House for the past three months save for a handful of official trips, is eager to resume campaign activities and specifically his rallies, which offer him an opportunity to excite his supporter base.

Trump has been trailing presumptive Democratic nominee Joe Biden nationally and in battleground states, amid scrutiny of his handling of the pandemic and recent protests against police brutality that have gripped the nation.

Trump is expected to attend a fundraiser in Dallas on Thursday, his first in-person campaign event since March. Trump headlined his last rally in Charlotte on March 2.