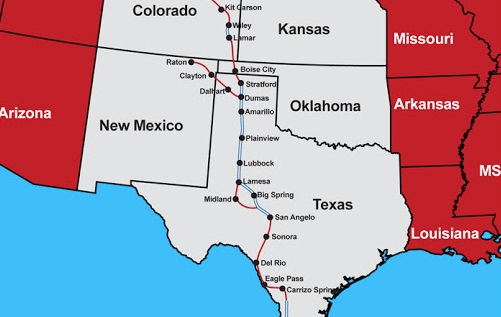 US Representatives Jodey Arrington and Henry Cuellar have introduced The Ports-to-Plains Highway Act of 2020, legislation that, if passed, would be a critical step in highway expansion that is projected to increase Texas GDP $55.6 billion in the first 20 years.
The bill would designate a future interstate extension of I-27 starting in Laredo and extending to the Panhandle, with a split at Sterling City to include a route through the Midland-Odessa region, and continuing into New Mexico and Colorado. Funding would come at a later date.
Arrington and Cuellar held a joint virtual press conference on Monday, June 15 to explain the bill that has recently been filed.
Arrington said that “establishing a four-lane, federal highway from West Texas through the Heartland is critical to enhancing America’s agriculture and energy dominance.”
The interstate is aimed at reducing congestion on I-35 and would provide another important trade route through West Texas, he explained.
Laredo is the top inland port in the United States with over $230 billion in trade traversing the border there annually, Mayor Pete Saenz of Laredo pointed out.
Over 14,000 trailers cross the border there daily. With the USMCA, the newly negotiated trade deal with Mexico and Canada takes effect on July 1, trade is likely to increase further.
“I am committed to investing in our country’s infrastructure to better facilitate international trade and reap the full economic benefits of the USMCA,” Cuellar said in a news release.
Arrington pointed out that even though the western area of the state represents only about 20 percent of the population, it provides virtually all of the food, fuel, and fiber production.
“This corridor is the aorta of [agriculture] and energy, and it is the lifeblood of not only Texas but of rural communities up through middle America. The infrastructure in this region currently represents, relative to the rest of the country, five percent, but 55 percent of the nation’s economic activity,” Arrington added.
The corridor has been designated by Congress as a high priority since 1998. The 86th Texas Legislature commissioned a feasibility study to be carried out and report back in the fall of 2020.  So far, the Ports-to-Plains Advisory Committee has held two meetings and has two more scheduled: July 15 in Lubbock and August 20 in San Angelo.
“The findings from TxDOT’s feasibility study further solidify the need for this extension,” said John Osborne, chairman for the Ports-to-Plains Alliance. “The enormous benefits for Texas’ economy and the safety of our travelers leave no question as to whether or not the extension is needed.”
State Senator Charles Perry (R-Lubbock) and State Representative Four Price (R-Amarillo) are members of the study committee.
“In Texas, I will say, congestion and commerce are two driving factors that really inspired Chairman Perry and I to work on this measure in the state legislature,” Price said, pointing out that demographers predict Texas’ population will continue to grow.
Speaking about the economic impact of the project, Perry said, “You start totaling up the pros and cons, there aren’t any cons. The economic investment has tremendous returns.”
The project is estimated to cost approximately $23.5 billion. Mayor Dan Pope of Lubbock, who is helping lead the feasibility study group, said that the project is expected to pay for itself within 20 years.
“Interstate 27 is a critical part of the future of West and South Texas. I-27 will connect Mexico and Laredo, North America’s busiest inland part, with the oil and gas, agriculture and food production centers in the Permian Basin, South Plains and Panhandle of Texas. I-27 will connect Texas with the Midwest and Western US allowing for better movement of goods and resources while also leveraging USMCA. Texas is poised to nearly double in population by 2050, I-27 will provide a critically-needed second north-south interstate to help fund a Texas economy that is the 10th largest economy in the world," Pope said.
Joe Kiely with the Ports-to-Plains Alliance explained that studies indicate the interstate will provide benefits of $2.40 for every dollar spent on it. Those benefits include travel time savings, crash reduction savings, and growth in the Texas economy.
Arrington called on Governor Greg Abbott to lend his support to the project. “This project is critical for the entire state and we will need your leadership.”
Cuellar also suggested adding a section between Laredo and Eagle Pass to help with border security issues.
Because Congress is starting the process of reauthorizing the highway bill, Arrington said this was the best time to introduce the legislation. Congress must authorize and designate I-27 as a project for funding. If the highway receives the designation, then the next step is to seek funding for the project through the appropriations process.
“Texas is a primary hub of transportation for the country, and the continued development of the Ports to Plains Corridor will provide more critical infrastructure in our community. By extending I-27, we will boost our economy, improve supply chains, and bring more Americans safely across the state.This important infrastructure will play a great role in supporting district 13, and our nation," US Representative Mac Thornberry said.
Local News