Arrest made in 2018 Amarillo murder case 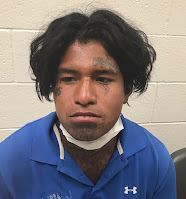 A joint effort between the Northern Texas Fugitive Task Force (NTFTF) - Amarillo Division, Western District of Texas – El Paso Division / Mexico Investigative Liaison (MIL) Team and the Amarillo Police Department Homicide Unit led to the location and arrest of Ricardo Huerta.
On June 16, 2020, NFTFT members where advised Huerta had been encountered in the City of Chihuahua, State of Chihuahua, Mexico.  During the encounter it was revealed he was United States Citizen who, did not possess legal documents allowing him to be in, travel through or remain in the Republic of Mexico. Officials then found that Huerta had an outstanding warrant for Murder in Potter County, Texas.
On June 17, 2020, due to his illegal status in Mexico Huerta was deported through Juarez, Chihuahua, Mexico to El Paso, Texas. Huerta was subsequently booked into the El Paso County Jail on the outstanding murder warrant and is awaiting further court proceedings.
On the morning of July 11, 2018, officers of the Amarillo Police Department were dispatched to the west alley of the 900 block of S. Arthur on a female that was found lying on the ground. The 28-year-old female, identified as Latrece Latell Black, was deceased.
Local News