Analysis: In some places in Texas, sales tax revenues have risen during the pandemic 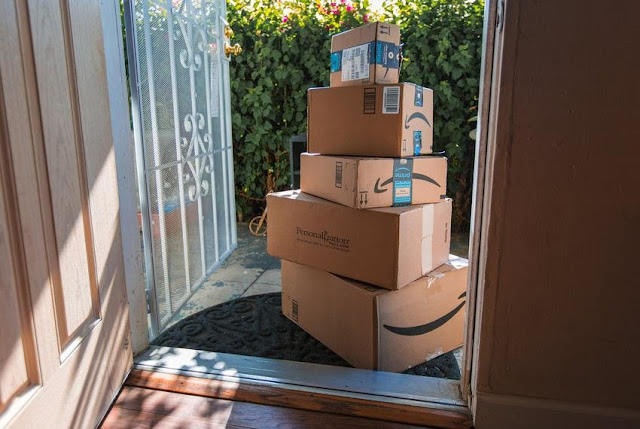 By Ross Ramsey
San Marcos and other cities have found a way to keep money flowing into their accounts in spite of the economic shutdown: the international shopping venue known as the internet.
Some of the biggest retailers don’t have to have their doors open to customers to stay in business and even to thrive. Amazon’s not the only big seller online, and the Texas cities those companies designate as the homes of their online stores reap the sales tax benefits — as if the stores themselves were based there. Best Buy, for instance, sources its internet sales to San Marcos.
And the online stores have remained open in this season of the coronavirus. The latest state sales tax distribution to cities — based on April’s taxable sales — was down 11.1%. At the same time, the sales tax allocation to San Marcos rose 51% for the same period.
Play that forward. Cities with financial hedges like that — and internet sales is only one of many — will be able to avoid budget cuts that are surely ahead for most other places, which also rely heavily on sales taxes but where brick-and-mortar stores have been closed for all or part of the last three months.
It’s an interesting quirk in tax policy, if that’s your thing. But it’s a sign of how the shift from economic boom to bust has been unevenly distributed. Some local governments will be taking bigger hits in sales tax revenue than others, and a few are prospering because of changes in shoppers’ habits.
The pandemic sent people home. Lots of them have to work from their homes. Lots of them had to buy some of the stuff — computers, cameras, printers and whatnot — to make their home offices function.
It’s not just work gear. People who can’t go out and do things spend more time at home, playing video games and streaming movies and TV shows and other assorted dross. That can be equipment-heavy, too.
If you can’t go to the store, you go online. And if you’re buying from a company online, the local portion of your sales taxes might not be going to the place where you live. In the case of Best Buy, for instance, those revenues are going to San Marcos. Buy something from Dell, and Round Rock picks up the local tax.
That’s been the subject of some tax policy wrestling matches, but during a pandemic, it’s had another, unexpected effect. It’s been an effective hedge, for some places, against the plunge in retail sales — and the taxes they generate — caused by stay-home policies, by temporary orders to close businesses, and by some Texans’ unwillingness to get out and shop during a pandemic, with or without the government telling them what to do.
Sales taxes are collected by the state, which then distributes the local share of the money to the cities where the sales were made. But in the case of internet sales, those distributions don’t necessarily go to the buyer’s location. Round Rock gets the local Dell taxes from online sales even if the buyer is in Fort Stockton. San Marcos gets the Best Buy local taxes even if the buyer is in Corpus Christi.
The fruits are evident in the latest distribution numbers from the Texas Comptroller of Public Accounts. On average, Texas cities got 11.1% less in this year’s June tax distribution than they got last year; the May distributions were down an average of 5.1%.
Not all of these places are online or virtual destinations — some have distribution centers, or warehouses, or headquarters — but a number of Texas cities benefited from double-digit percentage sales tax increases in April or May, or both: San Marcos, Schertz, Victoria, Pflugerville, League City, McKinney, Lufkin, Carrollton and DeSoto. On the other end of the spectrum, 44 Texas cities — including Houston, San Antonio, Dallas, Austin and Fort Worth — each saw double-digit percentage decreases in sales taxes.
Those at the bottom of the list will be looking at spending cuts and/or property tax increases when they write their next budgets in September and October. They’re bringing in much less money than expected.
Those at the top of the list won’t be trapped in that financial squeeze play.
This article originally appeared at the Texas Tribune.
Opinion