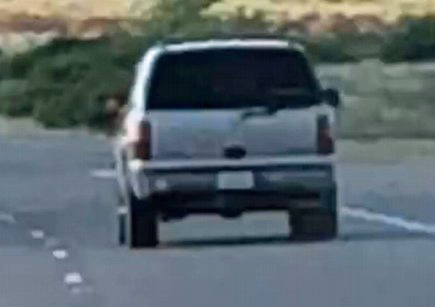 Amarillo Crime Stoppers is asking for help to identify a driver involved in a hit and run accident that sent one person to the hospital in this week’s “Crime of the Week”.
On Sunday May 17th, the Potter County Sheriff’s Office was called to the Canadian River on a vehicle accident. The victim was riding a motorcycle and was struck by a gold or tan GMC Yukon.
A witness attempted to follow the suspect and was able to take a photo of the vehichle as they fled north on Highway 287 towards Dumas.
Witnesses described the driver as a younger Hispanic male, slender build, with curly hair that was shaved on the sides and back. The passenger was described as being a heavier set Hispanic male.
The Yukon was said to have a black grill guard with damage to the driver’s side headlight assembly.
Investigators said the victim was transported to a local hospital with non-life threatening injuries.
If you have any information on this crime or know who the suspect is, call Amarillo Crime Stoppers at 806-374-4400. You can also submit an anonymous tip online at amapolice.org or by using the P3 Tips App.
If your tip leads to an arrest you could earn a reward of up to $1,000. Remember to “Say It Here” and say it anonymous with Amarillo Crime Stoppers.
Local News