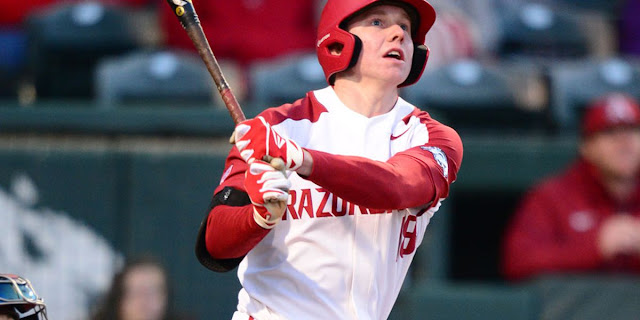 The Baltimore Orioles selected Arkansas center fielder Heston Kjerstad with the second overall pick of the MLB Draft, using their top pick to infuse their system with the most highly-touted left-handed college power bat in this year’s class.

Kjerstad grew up in Amarillo and attended Randall High School. As a junior, he batted .477 with 32 RBIs and was named the District 3-5A Most Valuable Player and first team All-State.

Kjerstad was named first team All-State and District 3-5A Most Valuable Player again as a senior. He was drafted in the 36th round of the 2017 Major League Baseball Draft by the Seattle Mariners, but opted to play college baseball at Arkansas instead

The O’s ultimately landed on what’s become the signature demographic for EVP/ GM Mike Elias and assistant GM Sig Mejdel at the top of the Draft, a polished, premier college position player, rather than take riskier bets in the pitching and high school ranks. Baltimore has $13,894,300 in spending power this year to spend on six picks, the most of any team, with the No. 2 pick valued at $7,789,900.

Kjerstad is expected to command significantly less than that, allowing the O’s to potentially use larger chunks of their bonus pools on pitching with their next two picks at No. 30 and No. 39. The scenario is similar to when Elias and Mejdel went under slot to draft Carlos Correa first overall with the Astros in 2012, passing on several prospects who were expected to demand higher bonus.