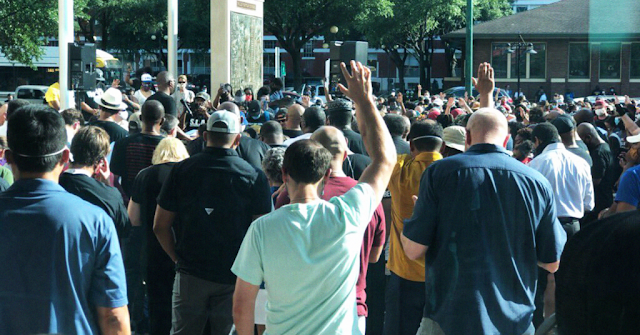 With his voice raised, Gov. Greg Abbott called the death of Houston native George Floyd at the hands of Minneapolis police “horrific.”

“Let’s be clear. What happened to George Floyd is a horrific act of police brutality,” said Abbott. “It should never have happened, and we must ensure that it never happens here in Texas. I join the millions of Americans who seek swift justice in this case.”

Abbott said people are rightfully angry, but violence and vandalism are never the answers. He said those acts, which he attributed to people from outside of Texas, are overshadowing Floyd’s death.

The governor and the four U.S. Attorneys in Texas announced Monday that anyone arrested or charged with violence or looting would be transferred to federal custody and subject to federal prosecution.

“We will not tolerate those who want to come into our city and exploit these peaceful protests to cause mischief for its own sake or for their own personal gain,” said Dallas Mayor Eric Johnson. “The violence, vandalism and theft that we saw committed by some groups of people over the weekend is not reflective of the city that I know, and much of it was perpetrated by people who are not residents of the city of Dallas.”

More than 1,000 Texas National Guard troops, Texas Department of Public Safety troopers and Federal Bureau of Investigation officers have been activated to assist local law enforcement in Houston, Dallas, San Antonio and Austin since the weekend.

Before the Dallas news conference, Abbott said he reached out to some state lawmakers about beginning the discussion of criminal justice reforms. He said the work to craft legislation needs to begin now instead of waiting until the 2021 legislative session begins in January. He did not, however, provide any specific ideas.

“We are open to putting everything on the table and working toward positive solutions that will improve Texas,” he said.

Two autopsies, one by the Hennepin County Medical Examiner in Minneapolis and another commissioned by Floyd’s family, offer different opinions on the precise cause of death, but both say that it was a homicide.

Floyd, 46, died after being handcuffed and held on the ground by multiple police officers, one of whom knelt on Floyd’s neck for almost nine minutes.