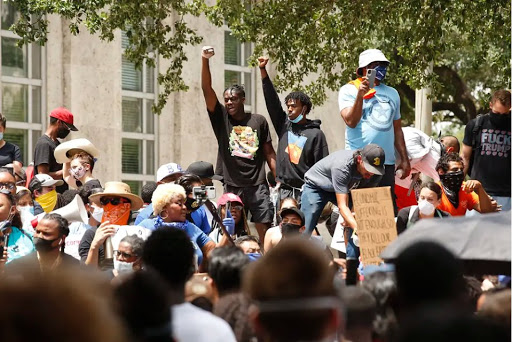 By Eddie Gaspar, Shelby  Tauber, Pu Ying Huang and Miguel Gutierrez Jr.
Texans protested in Austin, Houston, Dallas, San Antonio and Fort Worth throughout the weekend, spurred by the death of George Floyd, a black man who was killed in Minneapolis police custody Monday. Floyd had been a longtime resident of Houston's Third Ward.
Footage from a now-viral video showed that Floyd died after a white officer kneeled on his neck long past the point when he lost consciousness. Floyd was handcuffed and in police custody in Minneapolis when officer Derek Chauvin put him into the chokehold. Chauvin has been fired from the Minneapolis force and charged with third-degree murder and second-degree manslaughter. Three other police officers shown in the video alongside Chauvin were also fired.
On Sunday, Gov. Greg Abbott declared a state of disaster for Texas in response to the demonstrations across the state. The move allowed Abbott to designate federal law enforcement officers to perform the duties of peace officers in Texas. San Antonio and Dallas instituted curfews over the weekend.
Abbott, who has denounced Floyd’s death as “a consequence of poor police work,” said Saturday that more than 1,500 Texas Department of Public Safety officers had been dispatched to cities with protests. “As Texans exercise their First Amendment rights, it is imperative that order is maintained and private property is protected,” he said in a statement. He later said he was also activating the Texas National Guard to respond to protest violence.
In Austin, protesters carried signs and chanted slogans about Mike Ramos, an unarmed man who was shot to death by police last month. Austin Mayor Steve Adler said this month that he was “very disturbed” to see spectator video where “Ramos does not appear to threaten but ends up dead,” according to the Austin-American Statesman.
On Sunday, Ramos’ mother, Brenda Ramos, spoke from the southeast Austin apartment complex where her son was shot and killed by a police officer. She called for Austin Police Officer Christopher Taylor, who shot Michael Ramos, to be punished.
“I’m not getting any answers,” Brenda Ramos said, according to a KVUE news feed. “Why hasn’t Officer Taylor been fired? Why hasn’t Officer Taylor at least been suspended?” (The case will be presented to a grand jury, Travis County District Attorney Margaret Moore said, according to the American-Statesman.)
Brenda Ramos also urged people not to escalate protests to violence, saying she wants “peace and quiet and respect” for her son and her family.
Over the weekend, photographers Eddie Gaspar and Miguel Gutierrez Jr. were in Austin to document the demonstrations there, which started at the downtown police headquarters and moved onto Interstate 35, blocking traffic for more than an hour.
Austin police used bean bag rounds and pepper spray during the protests, and news footage showed people standing away from traffic and others holding only signs being hit.
"While most of the demonstrations have been peaceful, some protesters have thrown rocks, bricks, eggs, bottles and Molotov cocktails," an Austin Police Department spokesperson told The Texas Tribune in an email. "They also attempted to take over areas of I-35 yesterday. In response, APD has utilized less lethal (bean bag) rounds and OC spray."
Smaller protests, as well as clashes between crowds and Austin police, continued into the night.
At one point, demonstrators raised their hands and chanted, “Don’t shoot!” as officers fired tear gas and rubber bullets.
People broke into a downtown store as some demonstrators worked to stop the damage, the Austin American-Statesman reported.
Some set fires and threw fireworks while firefighters worked to extinguish them. One protester used a blanket to put out a small blaze, the Statesman reported.
“That’s a private citizen’s car,” he told the paper. “That has nothing to do with the police. We can have justice and peace.”
Alex Samuels and Clare Proctor contributed reporting.
This article originally appeared at the Texas Tribune.
Texas