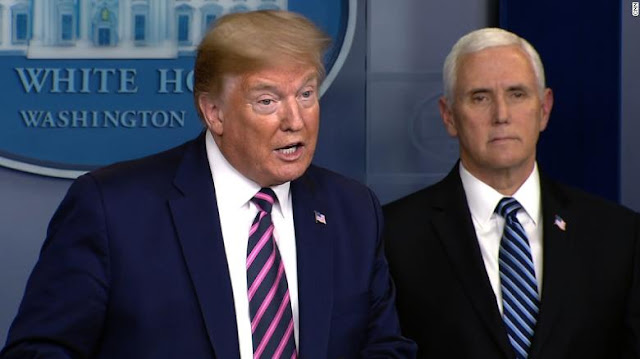 Vice President Pence's office confirmed Tuesday the White House is in the early stages of winding down its coronavirus task force.

The decision to disband the task force, which includes medical experts, public health officials and leaders from various government agencies, is the clearest indicator yet that the White House is ready to turn the page to focus on the economy, even as doing so could lead to a spike in infections.

Pence told reporters that the task force may break up around Memorial Day, a timeline he previously cited for when he believes the worst of the pandemic will have passed.

“I think we're having conversations about that and about what the proper time is for the task force to complete its work and for the ongoing efforts to take place on an agency-by-agency level,” he told reporters. “And we've already begun to talk about a transition plan with [the Federal Emergency Management Agency].”

“It's like disbanding the war cabinet in the middle of a war,” said Lawrence Gostin, a professor of public health at Georgetown University. “It’s not like we’ve conquered COVID, and it’s not like it’s even on the downward trend.”

Gostin questioned the benefits of allowing federal agencies to manage the response, citing high-profile issues in the past few months. The Centers for Disease Control and Prevention's (CDC) initial testing rollout was a debacle; the Food and Drug Administration has had difficulty regulating antibody tests and Health and Health and Human Services (HHS) Secretary Alex Azar has seen his influence wane.

The White House press secretary brushed back criticism that it would move forward into the summer without health experts on hand to provide insight.

News of the task force's dissolution comes a day after one frequently cited model from the University of Washington revised its forecast on Monday to project nearly 135,000 deaths through August, nearly double the previous estimate.

It also coincides with a number of states lifting restrictions that shuttered businesses and kept residents at home for the past several weeks to slow the spread of the virus.

The openings reflect the pressure Trump and state governors are feeling to respond to spiking unemployment caused by the coronavirus lockdown.

A majority of states have either started allowing certain businesses to reopen or laid out a timeline for when stay-at-home orders will expire. Some states have formed regional alliances to coordinate reopenings, while others have taken their own approach.

The reopenings include restrictions. Businesses will operate at limited capacity, and governors have urged their residents to maintain social distancing when possible.

Still, public health experts have warned that any increase in mobility will be followed by an increase in cases and, ultimately, deaths from the coronavirus. That reality puts Trump and other leaders in precarious positions as they toe the line between cheering on an economic revival and acknowledging the ongoing public health hardships.

“The question will be what is the acceptable level of public health impact compared to economic impact. What is the balance there,” said Cyrus Shahpar, an epidemiologist and former CDC official.

“Just because we want to open and we’re tired of being inside doesn’t mean the virus cares about any of that,” he said.

Public health experts have expressed alarm that many of the states already moving forward with plans to reopen businesses have not heeded the White House guidelines that lay out specific criteria to meet before loosening restrictions.

The guidelines, released in late April, call for states to see a decline in coronavirus cases and flu-like illnesses for 14 days before entering the first phase of reopening. States must meet the same criteria a second time before larger venues like movie theaters can open, based on the recommendations.

Some states preparing to reopen, including Florida and Montana, have seen their infections decrease for two straight weeks. But the majority of states have continued to see week-over-week increases, including Georgia, Oklahoma and Texas, all of which have started lifting restrictions.

Health officials have also raised concerns about how quickly states will be able to identify new clusters. The federal government has said extensive testing and contact tracing is needed to isolate those carrying the disease, but most states are moving forward before those resources are in place.

“Whatever we do, when we reopen it’s going to be associated with more cases and more deaths, and we want to do all we can to minimize those risks,” said Nicole Lurie, a member of Washington, D.C.'s, task force on reopening and a former HHS official in the Obama administration.

Dissolving the coronavirus task force may further complicate the reopening process, as there will be no singular federal body to advise states on best practices or when to snap back into more rigorous distancing.

But Trump has pinned his hopes for reelection on the strength of the economy. He has struggled to show restraint at times, backing protesters in Michigan, Minnesota and Virginia who opposed stay-at-home orders.

On Tuesday, he indicated the country had to open despite the potential health ramifications for some citizens.