Violent demonstrations rage across the country 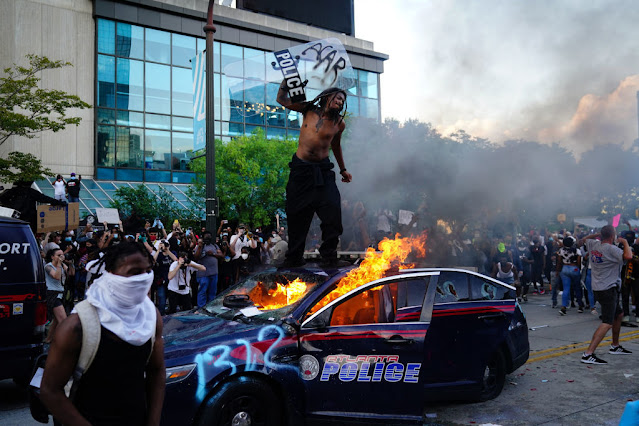 Protests erupted in cities across the country on Friday night amid mounting unrest over the police-involved death of George Floyd, with violent demonstrations and clashes between protesters and law enforcement stretching from coast to coast and reaching the outer barriers of the White House.
Footage of burning police cars in Atlanta, a gas station and other buildings on fire in Minneapolis, a police precinct in Brooklyn being charged by people and a standoff between demonstrators and Secret Service members wearing riot gear in Washington, D.C., were scattered across social media.
Video showed baton-wielding officers shoving individuals outside the Barclays Center in Brooklyn as they attempted to take people into custody. Police reportedly sought to use a city van to transport arrested individuals while elsewhere in Brooklyn at least one abandoned police van was set ablaze.
New York City Mayor Bill de Blasio (D) appealed for calm as images surfaced of numerous altercations between police and demonstrators. The mayor said that authorities were focused on "deescalating this situation" but he vowed "a full review" of what took place on Friday night.
"We don’t ever want to see another night like this," he tweeted.
In Portland, Mayor Ted Wheeler (D) lashed out on Twitter in the middle of the night after vandalism and looting rocked the city, with a justice center downtown set on fire and broken into by protesters, prompting police to user tear gas and other tactics to try to disperse those gathered.
"Burning buildings with people inside, stealing from small and large businesses, threatening and harassing reporters. All in the middle of a pandemic where people have already lost everything. This isn’t calling for meaningful change in our communities, this is disgusting," Wheeler tweeted.
Two police officers were reportedly injured during a confrontation with demonstrations marching through downtown Los Angeles, with protesters walking through streets and onto a local freeway, shutting it down. Police deployed tear gas and flash grenades as well as rubber bullets in an attempt to disperse crowds.
Minnesota Gov. Tim Walz (D) called in additional National Guard troops after thousands ignored the Minneapolis mayor's curfew on Friday evening as part of the fourth night of demonstrations in the city over Floyd's death. Walz said Saturday he would move to activate an additional more than 1,000 guardsmen after mobilizing 500 on Friday night.
"Minnesotans are asking for and deserve confidence that we can respond to this crisis, and we will," Walz tweeted early Saturday morning, saying state and local authorities were coordinating their efforts to tamp down on violence. "I urge for peace at this time."
Authorities had announced earlier in the day Friday that one of the officers involved in Floyd's arrest, Derek Chauvin, would be charged with third-degree murder and manslaughter. Chauvin was seen on video kneeling on Floyd's neck for about eight minutes as he was heard saying "I can't breathe" before he eventually died.
The charges failed to quell widespread demonstrations over Floyd's death, with protesters in multiple cities marching while chanting the words from Floyd – "I can't breathe."
Police said that one person was shot and killed in downtown Detroit after a person in an SUV fired shots into a crowd of demonstrators, according to The Associated Press.
Georgia Gov. Brian Kemp (R) issued a state of emergency and activated 500 National Guard troops "to protect people & property in Atlanta" at the request of Mayor Keisha Lance Bottoms (D). The mayor had issued an earlier appeal for calm in the city, though violent demonstrations continued, including outside CNN's headquarters in the city, which was vandalized.
In D.C., the White House briefly went on lockdown on Friday evening as protests erupted nearby. As the evening wore on, hundreds of demonstrators gathered outside the White House complex, with the Secret Service seen pushing back as demonstrators trampled a fence on the perimeter and threw bottles. Authorities eventually deployed pepper spray to disperse protesters.
In addition to the National Guard being mobilized in multiple areas, the AP reported that that the Pentagon has also put several active-duty military police units on the ready to deploy to Minneapolis as the protests spill into the weekend.
The orders to be ready were reportedly sent verbally on Friday after President Trump asked the Defense secretary for options to help address unrest in the city following several nights of demonstrations that then descended into looting and arson in some areas.
National