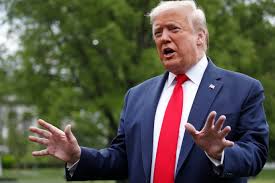 President Trump is threatening to veto legislation reauthorizing expired government surveillance tools if it passes in the House, citing “massive abuse” of the government powers in the Russia investigation.

“If the FISA Bill is passed tonight on the House floor, I will quickly VETO it. Our Country has just suffered through the greatest political crime in its history. The massive abuse of FISA was a big part of it!” Trump tweeted Wednesday, referring to the Foreign Intelligence Surveillance Act.

Trump’s opposition to the legislation, first voiced Tuesday night, threw a major curveball into its passage. The bill would reauthorize three lapsed surveillance programs under the USA Freedom Act, a 2015 law, and make some changes to the FISA court.

House Democrats have pressed forward with plans to vote on the legislation Wednesday despite calls from Republicans to pull the bill.

Pelosi told reporters earlier Wednesday that she hoped Trump would sign the bill, which passed the Senate earlier this month with a veto-proof majority.

"We have to have a bill, and we have to have it signed. ... That bill in the Senate goes a long way, and it is strongly bipartisan. ... We hope that it would be the bill that could get the signature of the president," she said.

The initial version of the legislation passed the House in a bipartisan 278-136 vote in March and won support from some of Trump’s allies in the House as well as Attorney General William Barr.

But the Senate made changes to the House bill by adding legal protections for some FISA warrant applications to appease civil liberties-minded lawmakers, forcing it to go back to the House for a second vote. The changes garnered opposition from the Justice Department, which argued that they would hamper its surveillance capabilities.

The House is scheduled to vote on the Senate version Wednesday, but the legislation is unlikely to pass without Republican support. When the initial version of the bill passed the House in March, it got the support of 152 Democrats, well short of the simple majority needed to pass without help from Republicans.

House GOP leadership has been urging its members to vote against the bill in the wake of Trump’s Tuesday tweet. House Minority Leader Kevin McCarthy (R-Calif.) also called House Majority Leader Steny Hoyer (D-Md.) on Tuesday night and urged him to delay the bill.

“I called Leader Steny Hoyer last night and told him — just wanted to tell them where Republicans are because we had worked very closely on this bill together. And I think we should take a deep breath. Let's work forward. ... Let's work through administration. Let's work with other House members,” McCarthy told reporters during a press conference on Wednesday.

Trump and Republicans have become increasingly critical of the FISA court in the wake of a Justice Department inspector general investigation completed last year that faulted the FBI for errors and omissions in surveillance applications used to wiretap former Trump campaign adviser Carter Page as part of the bureau’s investigation into Russia's interference.

The internal watchdog review did not find evidence that agents were motivated by bias in their decisions to open investigations into Trump campaign associates, however, undermining a key talking point of Trump and his GOP allies.