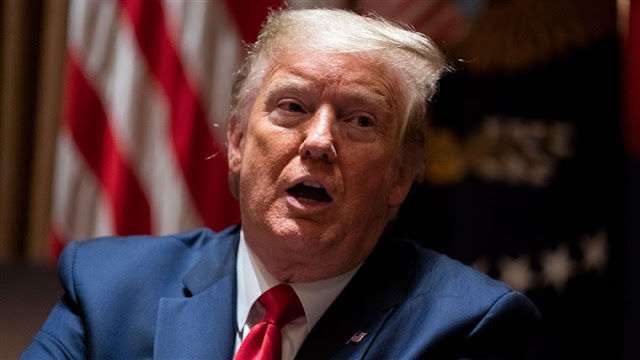 President Trump on Wednesday broke with Anthony Fauci after the nation's top infectious diseases expert warned a day earlier about the dangers of lifting coronavirus restrictions too soon.

"Look, he wants to play all sides of the equation," Trump told reporters in the Cabinet Room when asked about Fauci's comments to a Senate committee, adding he was particularly bothered by Fauci's cautious tone on reopening schools.

"I was surprised by his answer actually," Trump said. "It’s just, to me it’s not an acceptable answer, especially when it comes to schools."

"Now we want to do it safely, but we also want to do it as quickly as possible, we can't keep going on like this … You're having bedlam already in the streets, you can't do this. We have to get it open. I totally disagree with him [Fauci] on schools,” the president added.

Fauci, a leading member of the White House's coronavirus task force, told a Senate panel on Tuesday that lifting mitigation measures too abruptly could lead to a surge in coronavirus cases.

He also pushed back on the idea that schools should be reopened because the coronavirus does not appear to be as lethal to young children during a contentious exchange with Sen. Rand Paul (R-Ky.).

"We really better be very careful, particularly when it comes to children, because the more and more we learn, we're seeing things the virus can do that we didn't see from the studies in China or in Europe," Fauci said.

"You're right, in the numbers that children, in general, do much much better than adults and the elderly, and particularly those with underlying conditions, but I am very careful and hopefully humble that I don't know everything about this disease, and that's why I'm very reserved in making broad predictions," he added.

Fauci said that it would be "a bridge too far" to expect a vaccine or treatment to be available by the fall to facilitate students returning to college campuses.

The president has in recent weeks urged governors to consider reopening schools, though many states have already canceled classes for the remainder of the current academic year.

Trump on Wednesday suggested that he would not view the country as fully reopened until schools were operating again, though he said he would leave the final decision to state leaders.

"Our country’s got to get back, and it’s got to get back as soon as possible," he said. "And I don’t consider our country coming back if the schools are closed. And it’s had very little … impact on young people."

Trump added that older teachers could consider staying home for a longer period of time until the virus subsides.

Public health experts have advised that reopening schools could lead to a spike in cases without proper mitigation measures in place. While the virus has been less deadly in children and young adults, experts warn that it can still be dangerous, and that those groups can carry the virus and transmit it to older relatives and other vulnerable individuals.

Trump and Fauci have been at odds on a number of issues during the response to the pandemic. Fauci has pushed back on some of the president's claims about the efficacy of hydroxychloroquine and his assertion that the virus may not return in the fall.

Fauci on Tuesday downplayed any rift with the president.

"As I mentioned many times, I give advice and opinion based on evidence-based scientific information," Fauci said at the Senate hearing. "He hears that, he respects it. He gets opinions from a variety of other people, but in no way in my experience over the last several months, has there been any confrontational relationship between us."