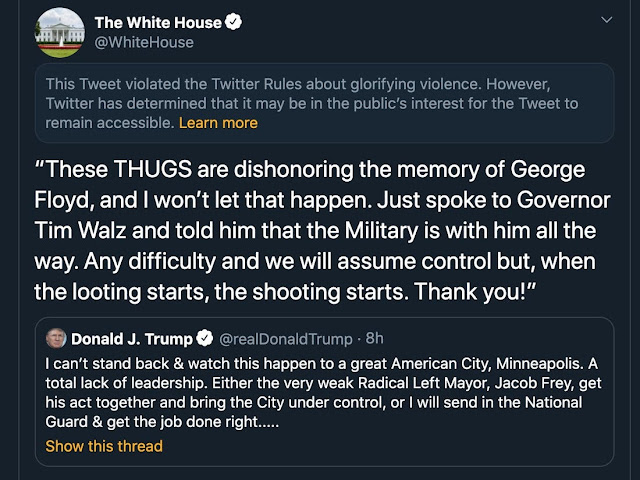 President Trump on Friday sought to explain his tweets criticizing Minneapolis protesters, doubling down on his assertion that “looting leads to shooting” but pushing back on characterizations that he was inciting violence.

“Looting leads to shooting, and that’s why a man was shot and killed in Minneapolis on Wednesday night - or look at what just happened in Louisville with 7 people shot. I don’t want this to happen, and that’s what the expression put out last night means,” Trump tweeted Friday afternoon, shortly before a scheduled press conference in the White House Rose Garden.

“It was spoken as a fact, not as a statement. It’s very simple, nobody should have any problem with this other than the haters, and those looking to cause trouble on social media,” the president continued. “Honor the memory of George Floyd!”

Trump sparked controversy overnight Friday when he lashed out at Minneapolis’s Democratic mayor and criticized protesters demonstrating in the wake of the death of George Floyd, an unarmed African American man who died after a police officer knelt on his neck while arresting him.

During the protests, crowds cheered as the Minneapolis Police Department’s 3rd Precinct was burned.

Separately in Louisville, at least seven people were shot during protests over another killing. Breonna Taylor, 26, was shot and killed by Louisville police in March.

In his earlier tweet, Trump called the protesters “thugs” and appeared to threaten military action in Minneapolis if the violence persisted.

“These THUGS are dishonoring the memory of George Floyd, and I won’t let that happen. Just spoke to Governor Tim Walz and told him that the Military is with him all the way,” Trump tweeted. “Any difficulty and we will assume control but, when the looting starts, the shooting starts. Thank you!”

The president’s statement was widely interpreted as threatening those protesting Floyd’s death, which was captured on video earlier this week and prompted massive outrage. Floyd was shown on video pleading with officers that he couldn't breathe as the white officer knelt on his neck.

The phrase “when the looting starts, the shooting starts” was used by Miami Police Chief Walter Headley in 1967 during the civil rights movement, when the city had a history of aggressive policing.

Twitter added a warning label to Trump's tweet, saying it violated the company's policies by “glorifying violence.” Trump has lashed out at the social media giant, accusing the company of censoring tweets from himself and conservatives.